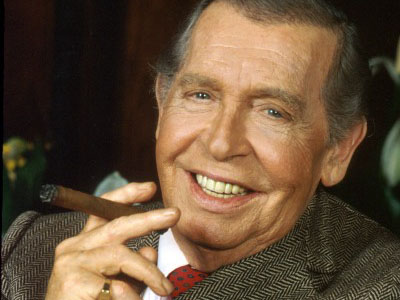 Kathie Lee Gifford’s musical about evangelist Aimee Semple McPherson is not a whitewash–she does tell us that Aimee liked her men, and she popped a lot of pills. But Kathie Lee did leave out one good story: that McPherson slept with comedian Milton Berle around 1930. Berle wrote about in his 2002 autobiography, detailing how he met McPherson when he was playing the vaudeville circuit and she was putting on outrageous shows to entice people into her Foursquare Church. Berle, it should be noted, was well known in Hollywood for the legend of his, er, sizeable manhood. (Ahem.) Kathie Lee could have written a cute song about this unusual coupling: an evangelist preacher and Jewish jokester.

Here’s the description of the events from Berle’s book via Wikipedia:

“I was both impressed and very curious … She was all dignity and class when it came her turn. The house went wild when she walked out into the lights.” Backstage, she invited him to see Angelus Temple. Instead, Berle wrote, the two of them went to lunch in Santa Monica, then to an apartment of hers where McPherson changed into something “cooler […] a very thin, pale blue negligee.” Berle said he could see she was wearing nothing underneath and that she only said, “Come in.” Berle said they met for the second and last time at the same apartment a few days later, writing, “This time, she just sent the chauffeur for me to bring me straight to the apartment. We didn’t even bother with lunch. When I was dressing to leave, she stuck out her hand. ‘Good luck with your show, Milton.’ What the hell. I couldn’t resist it. ‘Good luck with yours, Aimee.’ I never saw or heard from Aimee Semple McPherson again. But whenever I hear ‘Yes, Sir, That’s My Baby,’ I remember her.”