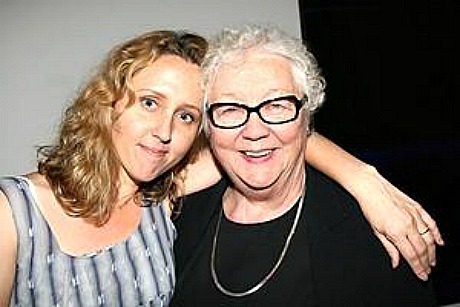 LEAH SYDNEY reports on the West Coast memorial this afternoon for our great friend and mentor Lois Smith, the beloved publicist and leader of PMK for years. The New York memorial is set for December 4th.

A memorial for Lois Smith was held today at the Linwood Dunn Theater in Hollywood CA.

With a screen-sized picture of Lois in red, the VIP’s of Hollywood came out to pay tribute to her.

Publicist Mara Buxbaum then spoke lovingly of her mentor, saying, “I learned what I know from her.  It was like learning painting from Rembrandt.”  Mara went on to say that even when she went out on her own, Lois was always supportive.  Mara continued, “She was a bright, shiny beam of light to anyone she came in contact with. I treasured my relationship with her. ”

Sean Penn then came on to say, “She had a dignity which is rare in this business.  She was plainspoken and sophisticated at the same time.  Lois would always tell me, “You have to think how the unwashed masses would think,  I would say to her, “that’s difficult for me, because I am one of the unwashed masses.”  Sean then went on to read a quote from William Saroyan.

Her lovely granddaughter, Warner publicist Brianna Smith then spoke about how fun her grandmother was to hang out with.

Norman Jewison then said of his friend and publicist for many years, “The warmth and strength of her character was astounding. I met her before she was married.  She was New York based. New York was her town, she knew everybody and she knew the business.  She had uncanny insight and she had the common sense of every situation.”

Referring to her trademark red jackets, Norman quipped to the laughter of the crowd, “Just today, I looked in the paper and I saw that that red coats were in. She wore them at these premieres and events for her clients.  She wanted them to see the beacon that was her.  Amidst all the tumult, she was tall and imposing, you couldn’t miss her.  It made you feel safe somehow. ”

Norman then went on to tell the funny story of how when he was filming “Fiddler On The Roof,” in Pinewood Studios in London, Lois literally made him go into town to Sotheby’s and by an original Marc Chagall drawing of 1905 of the original Fiddler.  “I told her I couldn’t afford it, she made me go and buy it anyway.  I bought it because she made me and now I think of her every time I look at it.  It’s one of my most treasured possessions.  My relationship with her was one of my most treasured as well.  I can’t think of anyone I had more respect for.”

Her talented actress daughter Brooke Smith said that, “My Mom was everybody’s biggest fan.  She really meant it.  She would see the best in all of us.  My Mom loved talent. She loved her job.  Meryl Streep wrote me a note and said that my Mom was one of the last gentlest women in the business.  She loved this business.  The best way to honor her is to treat everyone with kindness and respect.”

The memorial ended with a glorious photo montage of Lois and her family, along with her clients and the famous along the way, Marilyn Monroe,  JFK, Robert Redford, Michelle Pfieffer, Winona Ryder, Meryl Streep and more.  What a lady. What a class act.