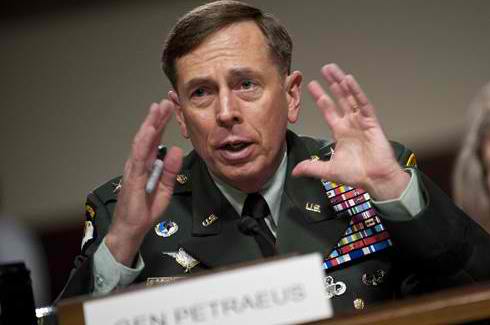 “All In,” the book written by General Petraeus’s mistress, Paula Broadwell, is now a hit. Thanks to revelations of their affair, “All In,”  has only 16 copies left in stock at amazon.com. It’s up to number 108 on amazon on the list of all books–and this is the hardcover edition. (The paperback, not so much.) Amazon readers didn’t like “All In” a lot when they first read it. Most commenters accused Broadwell of “hero worship” and said the book had no revelations or insights except for evaluations of Petraeus as a good jogger.

The book was co-written by Vernon Loeb, the Washington Post local editor, who is said to be in the running for higher rank at his newspaper. Alas, he didn’t break the story about Broadwell and Petraeus even though it was right under his nose. From what I gather, she did the “field work” and then phoned or emailed it into Loeb, who wrote it up. And no one ever questioned how this woman, who had not authored anything before, had such extraordinary access to the head of the CIA.

Of course, this reminds us of another woman who got incredible access to a US Senator running to get his party’s nomination. No one seems to have picked up on the fact that Broadwell lives in Charlotte, North Carolina not too far from Rielle Hunter, John Edwards’s ex (or maybe current, who knows?) mistress and babymama. Charlotte was also home to the Democratic National Convention over this past Labor Day weekend. Who knew so much was going in Charlotte, NC? When I was there this summer it just seemed like a quiet, happy place, just another sprawled out suburb. But of course that’s the kind of place where most soap operas are set!