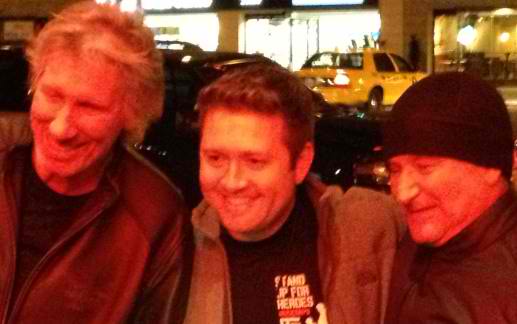 Bruce Springsteen auctioned off a signed guitar, plus six tickets to one of his shows and a backstage tour for $110,000 last night. It does seem that Springsteen may have run out of motorcycles–that’s what he’s sold off at previous annual “Stand Up for Heroes” shows put on ABC News’ Bob Woodruff and his wife Lee in conjunction with Caroline Hirsch and Andrew Fox of Caroline’s Comedy Club.

Even in the freezing cold the Beacon Theater was sold out last night to see Bruce and wife Patti Scialfa, plus Robin Williams, Ricky Gervais, John Mayer and Roger Waters of Pink Floyd. The night is for returned soldiers who’ve survived terrifying impairments. “Stand Up for Heroes” is about laughing and music and showing these guys a good time. The people you meet on the red carpet are real celebrities–missing limbs, whole bodie reconstructed or confined to a wheelchair, disfiguring accidents.

And even with stars aplenty, it’s the most mellow red carpet of the year, run by Frank PR like a class reunion.

Every year Springsteen comes, and plays, and tells a couple of dirty jokes. This year was no exception. And after he got off two such jokes, he and Patti sang “Land of Hope and Dreams” and “Working on A Highway.”

You may be able to see some of the performances at http://www.youtube.com/watch?v=DIAMfh8TfqU

John Mayer, recovering from throat surgery, jumped from his chauffeur driven SUV to the carpet to the theater. He’s not allowed to speak. On stage he played guitar, an instrumental version of “The Long and Winding Road.” He didn’t look happy, but he’s having a tough time.

Roger Waters of Pink Floyd is featuring his segment on www.pinkfloyd.com. It’s Roger playing with a band of vets from Walter Reed Army Hospital. It’s a fearless, moving segment.

The comedy bits came from Robin Williams, Jon Stewart, Ricky Gervais, and finally, Patton Oswalt. Much of it was off color, too hard to reprint. you had to be there. All of it was outrageous fun.

The Woodruffs, Hirsch, and Fox have turned “Stand Up For Heroes” into an annual event, coming from Bob’s near-fatal accident in Iraq in 2006. It’s turned their life into a mission. Hirsch and Fox literally go to the mats to put on a five star spectacle for the soldiers–it’s the most patriotic night in New York.