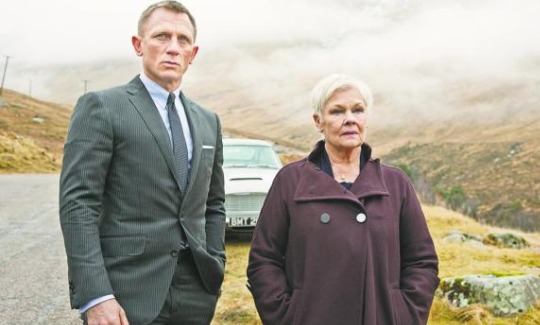 James Bond 23– “Skyfall”– came to New York last night at last. It opens on Friday after raking in nearly $300 million abroad in the last two weeks. The “Skyfall” cast couldn’t make it to the fundraiser for the Tribeca Film Institute at the Museum of Modern Art.

But there were plenty of stars including Sting and Trudie Styler, their actress daughter Mickey Sumner (wait til you see her in “Frances Ha” come May 2013), Pink Floyd’s Roger Waters, Seth Meyers of “Saturday Night Live,” “Forest Gump” producer Wendy Finerman, Grace Hightower DeNiro and the “Skyfall” screenwriter John Logan. We also ran into international music star K’Naan, whose new album Country, God or the Girl” is just out from A&M/Octone Records. (Download “The Seed” ASAP.)

And yes, James Bond does say goodbye to Judi Dench’s M in “Skyfall” but I won’t tell you how. Logan says in this film, despite several young beauties, “Judi Dench is our Bond girl this time.” She’s marvelous, as are Albert Finney and of course Javier Bardem as the new villain obsessed with James Bond. Daniel Craig will only be more popular in this role now. Logan is writing him a two part Bond film, numbers 24 and 25.

PS The Tribeca Film Institute set up a table for people to make Hurricane Sandy donations to the Red Cross. You’re going to be seeing that at every charity event from now on this fall and winter.