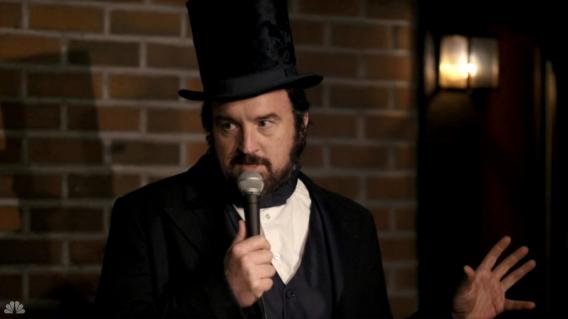 If you saw “Saturday Night Live” this past weekend, then you probably caught the brilliant sketch about Abraham Lincoln that aired in the first half hour. Show host comedian Louis CK played Lincoln as a stand up comic right before his assassination. Seth Meyers wrote the sketch, which was sublime. The Lincoln segment has already caught on at Hulu.com. But now I’m told that sometime Tuesday or Wednesday, a fuller, longer version will show up on Hulu. Apparently Louis CK did quite a bit more stand up as Lincoln, and it’s hilarious.

Coincidentally, I ran into Meyers last night at the “Skyfall” premiere. We had a good laugh about his summer long stretch as this column’s number 1 pick to join Kelly Ripa as co-host of “Live.” Meyers told me: “I loved hosting the show with Kelly. I like trying new things. And she’s amazing. But I could not have done that and Saturday Night Live. When I got back to our own show, I felt like I was home.” Meyers added that he thought Michael Strahan was “doing a great job.”