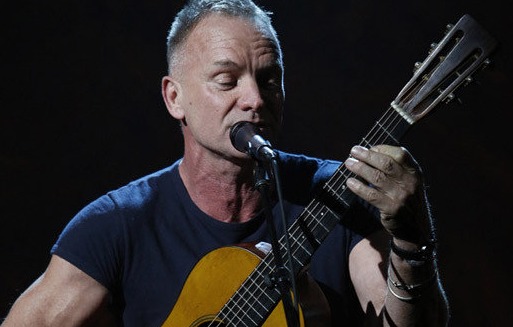 Over at www.nbc.com you can watch the entire telethon for Hurricane Sandy survivors and victims. Matt Lauer put the show together in about five minutes, but it’s a success from beginning to end. Sting, a passionate transplant to New York, sets the tone with “Message in A Bottle.” It’s just him, the delivery is stark and moving. Sting, who grew up in a real seaside town and knows from tragedy there, was channeling a lot of those feelings.

That doesn’t diminish our local heroes– Bruce, Billy, Jon Bon Jovi– each of whom anchored the show. Springsteen was smart to choose “Land of Hope and Dreams” rather than “My City in Ruins.” He kept it positive. Billy Joel’s “Seen the Lights Go Out on Broadway” was apt since below 39th Street there were no lights on Broadway. (Broadway has also been wrecked by Mayor Bloomberg’s bike lanes, turning lanes, potted plants and garden tables but that’s another story.)

Christina Aguilera was probably the big surprise on both the telethon and Jimmy Fallon’s show that night. If only she were singing like that on her current records, she’d still have a recording career. “Beautiful” is still her signature song. On Fallon’s show, Aguilera was magnificent: http://www.youtube.com/watch?v=XQ4Xmp9XhIw

We’re waiting for numbers from NBC to see how much the telethon raised. And hopefully the American Red Cross is using that money effectively even as we speak.