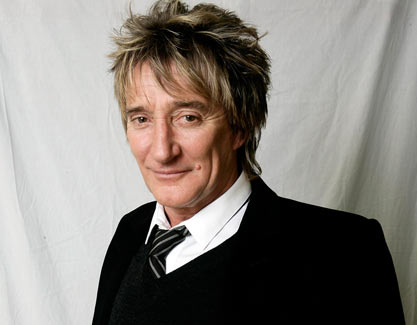 Rod Stewart’s autobiography is out, and it’s as full of stories as Keith Richards’ book was last year. Rod is on with Katie Couric right now, and he just addressed the most persistent urban myth about him–that he had to have his stomach pumped after an encounter in a San Diego gay bar. Yes, they actually addressed this. Rod — who is very good natured in the interview– got a good laugh. “I’m as heterosexual as they come!” he laughed. He explained that a former publicist, who was gay, made up the story after Rod had to fire him. The story took on its own life, just like a similar one about Richard Gere (which is, yes, completely untrue).

This is how the story reads in his book:

“Toon’s revenge [for being fired] was absolutely inspired. He fed the press a story in which, as a consequence of an evening spent orally servicing a gang of sailors in a gay bar in San Diego, I had been required to check into a hospital emergency room to have my stomach pumped. With minor variations (the quantity of the extracted fluid tends to fluctuate: seven pints, three ounces, half a quart; it’s a relatively open field), this story has stayed with me ever since. Say what you like about Tony Toon— and God rest his soul— but he was good at his job.

For the record, then (and just to put it simply and clearly for posterity’s sake): I believe I was in the Hotel Cipriani in Venice on the night of the alleged incident. I have never orally pleasured even a solitary sailor, let alone a ship’s worth in one evening. And I have never had my stomach pumped, either of naval-issue semen or of any other kind of semen. Nor of anything else, for that matter. Again, it’s all about clearing these things up and moving forward.”