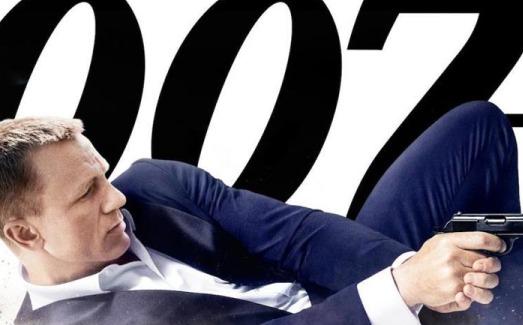 There are many spoilers for the 23rd James Bond movie, “Skyfall.” Some of them I may be able to tell you closer to the UK opening on October 26th. But here’s one that surprised me: Wolf Blitzer is in the film. So is CNN. Instead of using a fake newscaster or a retired or sidelined one, director Sam Mendes puts Blitzer reporting from CNN on news about Bond’s agency, MI6. It’s a good commercial plug for CNN, to go along with a few others from the likes of Volkswagen Beetles, Jaguar, Sony VAIO computers, and Caterpillar tractors.

But let’s cut to the chases–and there are a lot of them. “Skyfall” is like “rosebud” in this film, a keyword that comes to mean a lot in the end. To James Bond, played the world-weary-but-always-in-shape Daniel Craig, it means home, and so he goes in his classic Aston Martin to Scotland, reliving bits and pieces of James Bond past, getting analog in a digital world. “Skyfall” is a lot about getting back to basics. Even the new young Q, Ben Whishaw, tells James the days of fancy gadgets are over as he hands him, simply, a gun and a radio. “You expected an exploding pen?” Q asks rhetorically.

The meeting between middle aged Bond and whippernapper Q is classic, as 007 must endure a new generation coming to work for MI6. In fact, it’s the seniors who rule “Skyfall” as Dame Judi Dench and Albert Finney are Bond’s assistants in the major act three climax. He doesn’t need young people during war–he’s got two young females whom he beds quite nicely, thank you. And a bit of a first-ever male admirer in Javier Bardem’s campy, Oscar worthy villain Raoul Silva. Their initial exchange is a little more flirtatious than James Bond has ever been in this department. During their pas de deux I could almost imagine Sean Connery blowing a gasket.

But “Skyfall” is also maybe the best written, most explosive James Bond in years and years. It’s funny and tragic at the same time. The action sequences are superb. The opening, in particular, is a knockout, as Daniel Craig goes from a high speed motorcycle chase to that tractor on top of a fast moving train. There are several more terrific set pieces including an underwater fight under a sheet of ice and a cool in-silhouette mano a mano battle on the top floor of a skyscraper, punctuated by blasts of gunfire.

And Judi Dench, playing the drama as Shakespeare and the comedy with her usual slyness, gets one of the best lines ever whilst riding alongside Bond in the vintage Aston Martin. “Are you going to eject me? I could care less.”

“Skyfall” is also very much a changing of the guard, with some new characters played by Ralph Fiennes, Naomie Harris, and Whishaw– added to the mix, all certain to return in Bond 24 (the promise of more Bond is written right there on the screen at the film’s end).

And Daniel Craig? He’s stirred, but never shaken. How can you not like a secret agent who’s always dressed in a perfect bespoke suit or formal wear for every adventure? His James Bond is either fully dressed at all times not at all. He is always ready for action– although “Skyfall” is bit more chaste than his two prior Bond films, and a lot lighter on the violence.

One more thing: MGM/Sony should release the opening credits as video to go with Adele’s “Skyfall” theme song. It’s very well done and would go viral on YouTube in a second. The song, already out in record form, is even better in the film.