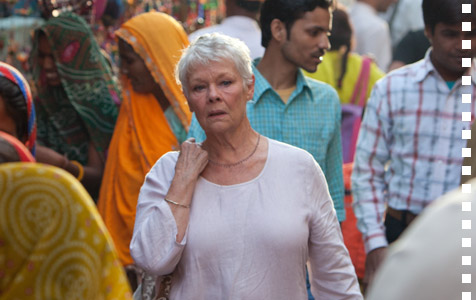 The first Oscar screener has arrived. Yikes! It’s only October 17th. Well, anyway, it’s John Madden’s very popular “Best Exotic Marigold Hotel.” And the screener comes with all the potential nominees listed under their categories. I’m surprised, but not shocked, that Judi Dench and Bill Nighy have been placed in lead and not supporting. I thought the whole cast was supporting. Judi Dench might make into lead, but Nighy will not– not with Daniel Day Lewis, Joaquin Phoenix, Denzel Washington, Tom Hanks, Bradley Cooper, Hugh Jackman, Russell Crowe, and Ben Affleck all swarming about.

“Hotel” has a good shot at Best Picture, maybe Best Director (John Madden), and Best Adapted Screenplay. Maggie Smith has a play at Supporting Actress. Dench, loved by all, could wind up in Best Actress with Jennifer Lawrence, Meryl Streep, Viola Davis, maybe Halle Berry (I have no idea how “Cloud Atlas” will be received at this point), and Quvenzhané Wallis, the little girl from “Beasts of the Southern Wild”– although that’s kind of ridiculous. What is she? Six? Seven? There should be an age requirement to be nominated for an Oscar.

Anyway, congrats to “Best Exotic Marigold Hotel.” First through the mail slot. And a realistic contender!