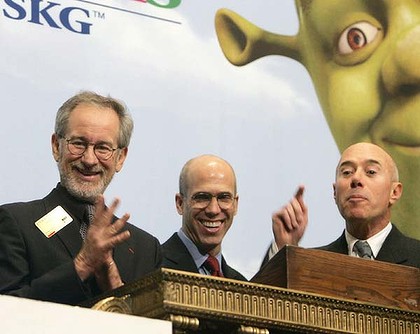 Steven Spielberg, Jeffrey Katzenberg, and David Geffen– the three original principals in Dreamworks SKG– are each giving $30 million to the Motion Picture Television Fund, the foundation that operates the Actors’ homes and takes care of veteran industry players. This, despite–or maybe because of — a terrifying August report about the Woodland Hills skilled nursing unit. “Residents,” the report reads, “are needlessly suffering as they die.” (See below.)

Katzenberg, of course, has been instrumental in raising money for the MPTF, and was inadvertently caught up in the controversy about closing down long term medical care there. (It’s since been resolved favorably to the residents.) His heart has certainly been in the right place, and so has his wallet. George Clooney is the current chairman of the drive to raise $350 million to put the MPTF in good shape. He’s already gotten pledges of $30 mil each from producer Steve Bing and media mogul Barry Diller, and $20 mi each from Kirk and Anne Douglas, and News Corp.

However: the MPTF still has some severe problems. A report in August from the group Operation Guardians was severely critical of the care at the facility’s skilled nursing unit. This is from the report, on the OG website http://www.canhr.org/operationguardians/MotionPictureTelevisionFund_OG.html.

More on this report shortly, but here’s the summary:

This facility’s atmosphere is described as chaotic and disorganized. An attending physician (who is also the medical director) “lacks basic medical knowledge concerning standards applicable to geriatric patients,” specifically the administration of medication. Physician charting notes lack meaningful evidence of the medical decision making process. Most residents are prescribed over ten medications, some even upwards of twenty. Medications are frequently administered solely to treat the side effects of other medications. One resident, before her death at the facility, had experienced a severe and extremely painful skin reaction to one of her numerous prescribed medications. Instead of discontinuing each medication one-by-one to determine which one caused the reaction, the patient was treated with topical ointment. According to the patient’s medical records, pain management was neglected.

The physician and nurse practitioner often treat patients without communicating. In one instance, the physician recommended an increase in the dosage of a medication that had been discontinued by the nurse practitioner. Painful morphine injections are administered to palliative patients whose pain medication could easily be administered orally. Two patients who had developed pressure ulcers were not adequately treated.

“Systemic problems…with extreme polypharmacy and the unwarranted prescription of psychoactive agents without adequate indications or consent…When residents reach the dying stage, care is definitely not in conformance with prevailing standards and residents are needlessly suffering as they die.”

On the MPTF website, the facility’s director, Bob Beitcher, says he’s trying to improve the situation. http://tinyurl.com/8fdn6um. Maybe the additional funds will help. Let’s hope so. In 2010, Beicher’s salary was $441,000. You’d think the least he could do is prevent needless suffering.