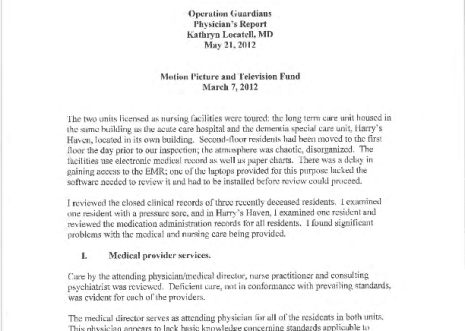 Exclusive: Following today’s announcement of a $90 million gift to the Motion Picture Fund by the Dreamworks trio, I stumbled across a repressed report about the Actors Home in Woodland Hills, California. The report was from the State of California, and obtained by the California Advocates of Nursing Home Reform though a Freedom of Information act request. They published the report, but according to executive director Pat McGinnis, it was ignored not only by the Department of Health, but by the LA Times, Variety, the Hollywood Reporter, and all the self-proclaiming website who say they cover Hollywood.

There are two reports. One is about the facility itself and the other is a physicians report. There was a surprise inspection of the facility on March 7th–about two weeks after the MPTF’s glittery “Night Before” fundraiser at the Beverly Hills Hotel with lots of stars and fancy gifts for donors. The report was issued on May 21, 2012, to Seth Ellis, then the head of Motion Picture Fund, from the California Department of Justice.  Ellis was subsequently fired from the MPTF; his dismissal was noted in some publications with no mention of the report’s existence.

The findings of the inspector are attached here. They include an Oxygen tank with no oxygen, peeling paint in a patient’s room, and dozens of questionable medical situations. One room had a gaping hole in its wall.

The second report, a physician’s report, is much worse. Prepared by Kathryn Locatell, MD, the report is actually shocking. Locatell, who did all the reports for nursing homes last year, is a specialist. She found “deficient care.” She said the chief physican had a “lack of basic knowledge.” Locatell basically concludes that the patients are being over medicated. She described “needless suffering” of dying patients. Locatell wrote: “The psychotropic medications policies in this facility are alarming.”

Most horrific: Locatell observed that the nursing care was a disaster–and mean. She wrote: “When residents reach the dying stage, care is definitely not in conformance with prevailing standards and residents are needlessly suffering as they die.”

How could this be? Hundreds of millions of dollars have been donated to this facility by movie studios, executives, and stars? No nursing home in America has received this kind of attention, fundraising. or interest. And yet, Locatell describes a nightmarish situation–and one not that different, mind you, from less well endowed or publicized places.

And yet executive director Bob Beitcher wrote this on the MPTF website in repsonse: “I hate surprises, don’t you? Especially bad ones. So when we received some very disheartening results a few weeks ago from a surprise survey of our skilled nursing facilities from Operation Guardians (OG), a team at the California Department of Justice focused on potential violations of federal, state, and local laws and regulations, I was none too happy. In fact, I was downright shocked. I thought we were better, much better, than how we were depicted in the OG reports. In fact, I was confident we were.” He concluded that changes had to be made, but wrote, as a defense: “I could also see as clearly how the reports were wrapped in an overall negative bias…”

Maybe Dr. Locatell wasn’t a movie fan or something. Why would she biased against the Motion Picture Fund?

Locatell wrote very seriously: In summary, systemic problems with the provision of medical care and services, with extreme polypharmacy and the unwarranted prescription of psychoactive agents without adequate indications or consent, create a risk of possible substantial harm to every resident of the facility.”