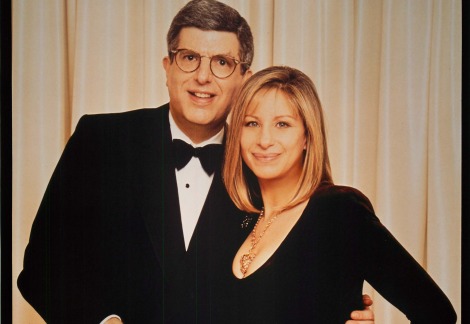 At her Barclays Center return to Brooklyn, Barbra Streisand got a little political tonight. The renowned liberal said, “I hope no one tells Mitt Romney how to get to Sesame Street. Or Pennsylvania Avenue.” She added: “He’s quite an actor. A chameleon really.”

Quipping and singing her hits, Streisand is utterly charming. She’s also battling a cold and had some chicken broth on stage. The fans are gaga. Among the many stars here are ex husband Elliott Gould, Sting, Trudie Styler, Woody Allen, Barbara Walters, Rosie O’Donnell and Michelle Rounds, Gerard Butler, and Ralph Lauren, Calvin Klein, and bff Donna Karan. Barbara’s husband James Brolin was very much in attendance as was his daughter Molly, and Barbara’s sister Roslyn Kind.

Some people have paid hundreds and thousands of dollars for their tickets. They were not disappointed. Streisand is the ultimate pro, whether she’s performing hits like The Way We Were or Enough is Enough, or classics from the Broadway songbook. She’s also extremely adept at delivering a well written, comic show with lots of endearing shtick. The show contains a memorial to Marvin Hamlisch similar to the one Barbra prepared for his recent memorial.

And her voice? Started hoarse, But warmed up. At 70 she still has ‘it’– and lots of it. The show is also meticulously arranged, like a living room. The songs and patter are pieces of really great furniture. And you’re very comfortable.

The show also featured Il Volo, a surprise singing appearance by Streisand’s son Jason Gould (proud and I think a little stunned dad Elliott Gould was in the audience), and several solos and duets with trumpetmeister Chris Botti, who was celebrating his 50th birthday as the clock struck midnight. Botti proved the perfect foil for Streisand, and almost a great co-host. Later, backstage, he met Rosie O’Donnell, who complimented him on his hosting skills. He also blew a mean trumpet.

Streisand finished the show wearing the second of two Donna Karan gowns. They worked beautifully in the arena, where she was backed by about a 40 piece orchestra. She sang “People,” came back for a couple of encores including a sensational rendition of “Happy Days Are Here Again.” Very happy in the audience were Alan and Marilyn Bergman, who wrote the lyrics to several of the songs Barbra sang, as well as famed actress Phyllis Newman, whose legendary late husband Adolph Green wrote some of the songs, and Jule Styne’s widow, Margaret, who also got to hear some familiar songs. “We were just kvelling,” Phyllis trilled.

Mostly, you watch Barbra Streisand run that show for three hours and you get it– the perfectionism, the skill, the instrument. Even though she has a lot of help from five decade old manager Marty Ehrlichman and music producer Jay Landers, it’s always on Barbra to make sure this thing goes right. She’s only done 83 shows in her whole life–this was number 83. Total. Period. For years she didn’t tour or perform live from the 60s til 1994. And now you’re amazed to see her pull it off. It’s like being captain of the QEII.

PS The night ended with a little more political speechifying–no candidate mentioned, just Barbra saying if we want healthcare and jobs and education, we know who to vote for. In Brooklyn, you didn’t have to guess who she was talking about.