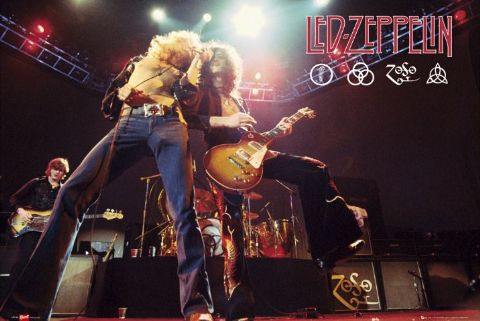 Apparently the Led Zeppelin press conference on Tuesday was a bust. The band is finally putting out a DVD from its December 2007 “reunion” show in London. But they fought with reporters, were nasty, and unpleasant. They’re not reuniting for a tour or anything. They just want money from the reunion show.

Hmmm….that show was supposed to be a memorial for Ahmet Ertegun, the legendary head of Atlantic Records. Shouldn’t the money be going to a charity?

Anyway, I was there at the concert. Here was my report from London on December 11, 2007. Don’t forget, this show was supposed to take place on November 26, 2007. Then Jimmy Page said he’d broken his finger.

Would it be an event if Naomi Campbell weren’t somehow at the center of things? While Led Zeppelin reunited in London to memorialize Atlantic Records’ Ahmet Ertegun, the supermodel was in a luxury box at the O2 Arena getting mugged.

As the show ended I ran into her coming out of the VIP exit. She was having a fight with one of the security men. As we passed, she announced to me, “Someone stole my handbag. It had two phones in it!”

It’s unclear whether Campbell reported the crime or how it happened. She made her complaint to security and then exited through the VIP section while thousands upon thousands of music fans swarmed over her.

She was the only celebrity known to have had a problem at a concert that was filled with A-list names. Mick Jagger, for example, attended the show with girlfriend, L’Wren Scott, while his children, Georgia and James, came with their mother, Jerry Hall.

The two groups did not run into each other. Hall and kids were satisfied to sit in very good seats at the side of the stage near Bob Geldof, while Jagger was seated in resort mogul Sol Kerzner’s private box with Mica Ertegun and James Taylor.

Elsewhere in the O2 Arena, lots of other celebrities watched Zeppelin and a stellar roster of musicians put together by producer Harvey Goldsmith pay tribute to the memory of Ahmet Ertegun. They ran the gamut from Rosanna Arquette to guitarist extraordinaire Jeff Beck.

Arquette’s friend Paul McCartney was expected but not seen, although his security man arrived and lingered near Arquette in the VIP café before the show.

Also seen in the café were the entire Presley family — Priscilla, Lisa Marie, Riley and son Ben. The four appeared to have cornered the London market on mascara, and Priscilla now looks like Morticia Adams. Why? Who knows?

Juliette Lewis also was spotted in the O2, as was Nile Rodgers, New York radio personality Carol Miller, Will Arnett of “Saturday Night Live,” legendary ’60s pop icon Lulu with rock jewelry designer Loree Rodkin, the Foo Fighters’ Dave Grohl and, ultimately, Foreigner’s Mick Jones, who played one song — “I Want to Know What Love Is” — with a full band and girls’ choir as a tribute to Ertegun.

At the after-party, Wyman started the show that then featured in succession a group of Atlantic all-star R&B performers whose CDs still sell for the label, some more than current acts. They included Sam Moore, Percy Sledge, Ben E. King and Solomon Burke.

But the after party at Club Indigo on the O2 campus was packed to the rafters while Moore wowed them with “Soul Man,” “Money,” “I Can’t Turn You Loose,” a tribute to Billy Preston on “You Are So Beautiful” and a gorgeous duet with Rodgers on “We Shall Be Free.”

Percy Sledge followed with “When a Man Loves a Woman,” King offered a tribute to the great Atlantic group the Drifters and Burke brought his famous throne and gospel soul tones.

It was the real Atlantic Records or, as Robert Plant said during the Led Zeppelin show, a tribute to when Atlantic was “the most magnificent record company on the planet.”

Of course, a lot has changed in all that time. Plant, for example, only arrived at the O2 Arena less than a half hour before the group went on stage at 9 p.m. Jimmy Page already was in the house before that, fretting about the show and how he would perform.

The corridor in front of the group’s dressing room was the only place “absolutely no one” with backstage passes was allowed to go before the show began. They were obviously nervous.

There was no reason to be. If you were a Led Zeppelin fan when they last performed together 30 years ago, nothing has changed. But to paraphrase the song they chose for a final encore, it’s been a long, lonely time since they rock and rolled. After blowing on stage like a thunderstorm with a trio of hits — “Good Times Bad Times,” “Ramble On” and “Black Dog” — the group stumbled.

A strange song selection combined with iffy audio dynamics didn’t help. “In My Time of Dying” and “Your Life” were a little obscure and too long for a crowd packed frighteningly like sardines onto the floor of an arena. To use the vernacular, it was a buzz kill.

The audience — which had gone wild singing the “ah-hah” refrain in Black Dog — drifted. Plant finally really spoke to the audience at that point: “Thank you for the thousands and thousands of emotions we’ve been going through for Ahmet.” He added: “And to bring Jason in.”

The reference was to Jason Bonham, who joined Plant, Page and John Paul Jones in place of his late father, John, on drums. Bonham the younger is a muscular, hard-hitting and enthusiastic drummer who gave the group a renewed zest for life.

His father would have been proud to see his bald son (funny since the remaining Zeps have heads of hair only Sweeney Todd could love) reinvigorate some of the hoariest music rock ‘n’ roll has ever seen.

Some things did not work so well. “Stairway to Heaven,” the group’s famous seven-minute-plus reverie and radio staple, should have been the finale. Instead, it sort of popped up in the middle of the set and had a pedestrian quality. The sound quality was distorted, and the grander moments of this soap opera were lost. It was a disappointment.

On the other hand, “Kashmir,” which has Middle Eastern tones and a shuddering drum line, was remarkable. When Plant twice hit beautiful high shimmering notes, the video operator was wise to show Page smiling from ear to ear. It was as if his partner had just made Olympic history.

“There are people from 50 different countries here,” Plant announced before the song began, “and this is one of them.”

Maybe because it was a one-off show and the group was nervous, there was little humor. The connection to the audience was more corporate than personal, a stark contrast to the later soul show when Moore, King and Sledge showed where Ertegun’s real heart belonged.

Still, you could see in Led Zeppelin’s dynamic English blues a connection to the world from where Ertegun (and Jerry Wexler) came. And when it was time to sing “Trampled Under Foot,” Plant not only cited Robert Johnson but cracked wise.

“We were in a church in Mississippi in 1932,” he said, smiling for the first time.