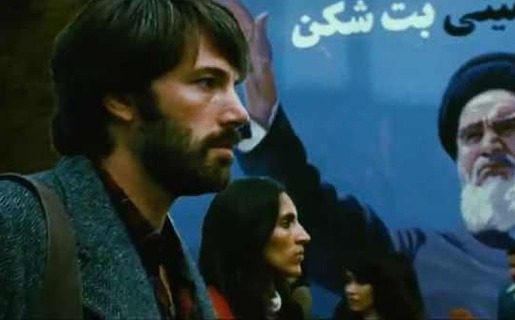 What to do when everyone on the New York A list wants to see a movie that’s already had a Hollywood premiere and is opening nationwide in three days? Why, have a double dinner and screening back to back at the Time Warner Center and Porter House Restaurant. That’s what Warner Bros. and the Peggy Siegal company did last night– and it was quite the scene. Especially the Porter House, which is cheek by jowl with the Stone Rose in the TW Center, and where the motion picture academy was having a get to know you night for members who wanted to meet new president Hawk Koch.

The fourth floor hallway was kind of in celebrity gridlock as numbers of stars poured in and out of both restaurants. But the centerpiece was “Argo,” Ben Affleck’s terrific thriller that opens on Friday. And imagine this scenario: Affleck, bff Matt Damon (with a shaved bald pate), the movie’s producers George Clooney (with girlfriend Stacy Keibler–yes tabloid hounds, they are still together!) and Grant Heslov, not to mention John Goodman, Alan Arkin, Bryan Cranston, Tate Donovan, and Scoot McNairy— all from the “Argo” cast.

I got a dinner seat with Grace Gummer and brother in law Benjamin Walker— two hot young actors right now; Grace’s sister is Mamie, who is Ben’s wife and the girls are Meryl Streep‘s actress daughters. Watch for Ben in “Cat on a Hot Tin Roof” this winter on Broadway with Scarlett Johansson.

And yes, Richard Gere and Glenn Close were there just to make this more complicated.

Peggy Siegal‘s rooster-ready Sally Hershberger hair cut was in extra high fluff as she and her indomitable staff kept seating all these people for steak dinners, then re-seating them as they moved to shmooze with friends, and get in and out in time to see the movie in the TW screening room. Which, let’s face it, they loved. “Argo” is an old fashioned edge of the seat thriller with 1970s style political intrigue.

What were Sting and Oliver Stone chatting about? How about Clooney with Ted Koppel? I’ll tell you– table after table was filled with interesting types. It was like a triple Vanity Fair party. Directors galore came to see how Ben Affleck did, including Barry Levinson, Oren Moverman, Neil Burger, JC Chandor, Steven Soderbergh and Tom McCarthy.

Clooney, Keibler and pals were wooed over to Amy Sacco’s new club No. 8 on West 16th St. and were there well after midnight, running into Gina Gershon–who was celebrating publication of her book “In Search of Cleo,” with agent David Kuhn and editor Lauren Marino. (If you can get in, and I was lucky to this time, No. 8 has some seriously cool private rooms complete with actual turntables and hundreds of LPs, not to mention nooks and crannies.)

It was around that time that Russell Simmons came on in with Stacey Dash, right after her “Piers Morgan” show appearance and endorsement of Mitt Romney. In the spirit of bipartisanship, no drinks were thrown, and the conversation was kept apolitical. But I had a nice talk with beautiful “Clueless” actress Stacey Dash, who is the cousin of Damon Dash and sister of Darien (once precariously in a  deal with Michael Jackson). More on that in another item…