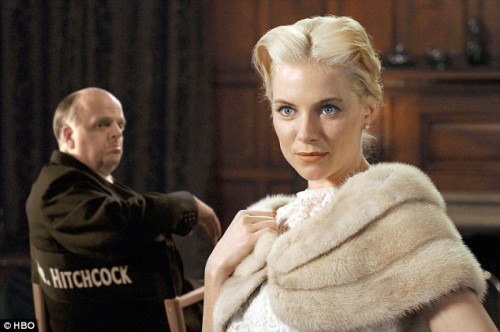 Sienna Miller certainly got a lot of ink when her career began, especially for her tempestuous romance with Jude Law. But now Sienna has a baby, is engaged to actor Tom Sturridge, and has settled down as a fine actress. At the Hamptons Film Festival, she’s caused quite a stir playing Tippi Hedren in Juilian Jarrold’s “The Girl.”

It’s quite an accomplishment. The HBO film stars Toby Jones as famed director Alfred Hitchcock, and tells the story of the director’s obsession with Hedren. He put her in two of his most famous films, “The Birds,” and “Marnie.”

Hedren– who a had a small daughter (who grew up to be Melanie Griffith)–spurned Hitch’s advances.  Then he set out to destroy her career by refusing to let her out of her contract to accept other work. Her film career sputtered. Jones and Miller are superb as the conflicted duo, Imelda Staunton is excellent as the put upon Mrs. Hitchcock. The movie is based on the well known biography of Hichcock by Donald Spodo.

Who knew Hitchcock was so crazy, obsessed, and sociopathic? Miller put it in perspective. “Have you seen his movies? You know something is going on there.” Allegedly, Hitchcock also drove Kim Novak crazy. And when Grace Kelly “left” him for Prince Rainier, he made fun of her. And you know Doris Day wouldn’t put up with him for a minute. Wait for the Emmy Awards and this year’s Golden Globes–lots of awards coming for Miller, Jones, and “The Girl.”