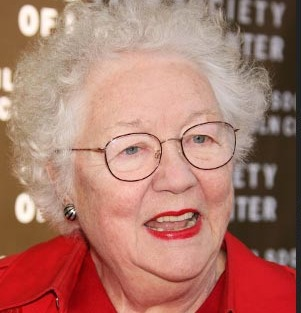 Lois Smith has died at age 85. She was a great friend and mentor for 30 years. Lois was tough when she had to be, but an angel. She loved actors, films, theater and filmmaking. From Robert Redford to Robert Altman, from Cher to William Hurt and so many dozens of stars–they loved her and owed her so much. The word is that Lois and her husband Gene were on a trip, and that Lois fell down some stairs. She lingered for about a day and passed away on Sunday. It’s an ignominious end to a incredible life and career.

For years Lois ran PMK with Pat Kingsley, building it into the premier pr firm for the top stars. She left briefly in the mid 1980s when she formed a partnership with Peggy Siegal, but then returned. Leslee Dart became their partner after that. While Pat was on the west coast, it was Lois on the east coast who made the company hum. In the later years she and Leslee shared an office– a big room–and it was all phones ringing and lots of noise.

Lois rarely lost her temper. Her modus operandi was gentility. She was also extremely honest. If she couldn’t make an interview happen, she’d tell you straight out. If she wanted it to happen, but the star wasn’t sure, she’d try her darnedest to work it out. A few years ago, she really wanted Meryl Streep to do an interview with for an Oscar magazine. She conspired with me to set up a coincidental meeting. She said, “You try. I’ve tried everything.” Meryl declined in the end, very sweetly. But Lois was there, rooting for me, crossing her fingers.

She loved her clients. Whether it was Robert Redford, her absolute favorite, or Michelle Pfeiffer. She didn’t just have easy clients, either. She represented Sean Penn during his most pugnacious incidents. She was at William Hurt’s side during his dreadful palimony/custody battle in the late 1980s. She was always there for Al Pacino.

I suppose they were all her favorites depending on the circumstances. But she was partial to Sidney Lumet, and extremely fond of Robert Altman. A few years ago one of our great achievements was getting Altman to be a guest star for the night at the Avon Theater in Stamford, Connecticut. We showed a new print of “McCabe and Mrs, Miller.” Lois was beaming because Bob got the royal treatment that night. Again she made it happen.

Lois had an earth mother quality– you wanted to hug her when she you saw her. Her white hair gave her that angelic look. When I first came into the business of writing entertainment stories, I’d see her around. But around 1984 we worked on a project together and that was it–I could see easily that if you stuck with Lois and listened to her, you could figure out what the heck was going on in the media-entertainment world. Again, she was the only person who’d give you a straight answer about anything. And when it was no, it was done with extreme kindness. (Some pr people are thrilled to turn you down.)

She was particularly proud of her family. She and Gene lost a son in the early 80s. But her son Luke, his kids, her daughter Brooke, the actress, and her family and career were her pride and joy. Little by little Brooke’s career took off–most pointedly as the girl in the well in “Silence of the Lambs” and then in Louis Malle’s “Uncle Vanya on 42nd St.” Lois was over the moon.

There was no nepotism. And in fact, Lois would tell me she was discouraging Brooke all the time. But the girl was very talented, and Lois was proud proud proud of her accomplishments. More recently Lois’s granddaughter Brianna worked at Sundance and then at IDPR in Los Angeles. She’s like a Mini Me of Lois, a real chip off the old block, and it’s been so much fun to run into her and gossip about grandma.

Life isn’t fair, is it? For years all her friends begged Lois to retire so she could enjoy “real life.” She gave up the business in degrees, always hanging in there for a few clients. I guess the last time I saw her was around the release of Marty Scorsese’s “Hugo.” We ran into each other on the street, and she had so much to tell me. We talked on the sidewalk for almost a half hour.

There are tons of stories. She was celebrated by the Publicists Guild about a decade ago, during Oscar week. It was a huge turnout. Her career stretched back to Marilyn Monroe and the real stars, long before any of us knew her. The room at the Beverly Hilton was filled with people who’d gotten their start with Lois, people whom she’d mentored, launched, sometimes had fired, but with whom she was still on good terms.

Even though Lois was retired, and living a great life, I think we always were comforted by knowing she was up in Plum Island, and could be reached in an emergency. And though she was 85, I think I — like everyone who loved her– had no concept of that. Lois Smith was forever in our minds. She was the reason we stuck it out, and stuck with it. Lois, we will really really miss you now more than ever.