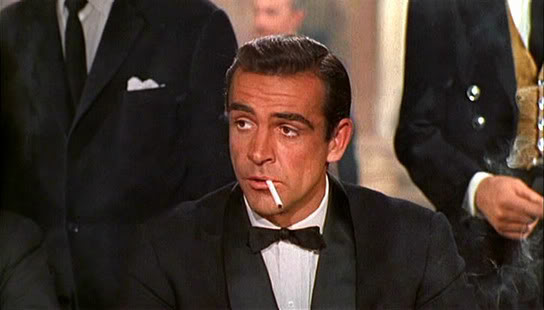 Sean Connery is still angry that he was replaced by Roger Moore as James Bond years ago. He’s the only one of the actors who played 007 who doesn’t appear in “Everything or Nothing: The Untold Story of 007,” a terrific new documentary about the Bond movies. Roger Moore, Timothy Dalton, Pierce Brosnan, and Daniel Craig are all part of the film, which will begin showings on EpixHD (www.epixhd.com) tomorrow–October 5th– the 50th anniversary of the first Bond movie, “Dr. No.”

Connery may not have not participated but everyone else did–and the result is a fascinating look back at how Ian Fleming’s spy novels became movies produced by Cubby Broccoli and Harry Saltzman- for the Connery run–Saltzman. (There are plenty of Connery clips.)

Connery, it should be noted, quit playing Bond after “You Only Live Twice” (1967). He was succeeded by George Lazenby in “On Her Majesty’s Secret Service.” Connery returned for “Diamonds Are Forever: (1971) but that was it. Roger Moore stepped in after that for “Live and Let Die” (1973) and the rest is history. Connery returned in 1980 in “Never Say Never,” a non-Broccoli movie based on “Thunderball” and produced by a rival who’d very early on gotten the rights to that novel from Fleming.

There’s great footage of Fleming, who explains how real life incidents became key moments in the books. There’s also a detail history of the families who produced the movies, grew up on them, and how daughter Barbara Broccoli now successfully produces the films with her step brother Michael Wilson.

Even though no Bonds were available in person at last night’s red carpet MoMA premiere (sponsored by Vanity Fair and Epix), several former Bond actors made it including Robert Davi, Maud Adams, and Carey Lowell. Some other A- list names included Chris Noth, Jeffrey Wright. Kate Upton, Chace Crawford, and Solange Knowles.

Epix starts playing “EON”– also the name of the company Broccoli and Saltzman– on Friday as well as running a marathon of Bond movies now, and a bigger one next spring.

Some things Bond fans will be interested in: how the transitions from one Bond actot to the next took place, the predicament of Brosnan with “Remington Steele,” how Dalton fared, and the peculiar decades long battle between Broccoli/Saltzman and another producer who kept trying to make Bond movies on his own (hence the not so good “Never Say Never.”)

My only criticism: not much reference to the Bond music. Maybe they couldn’t clear it? I don’t know. But mostly you get Shirley Bassey singing “Goldfinger” and Carly Simon wrapping up the film with “Nobody Does it Better.” And that’s pretty good.