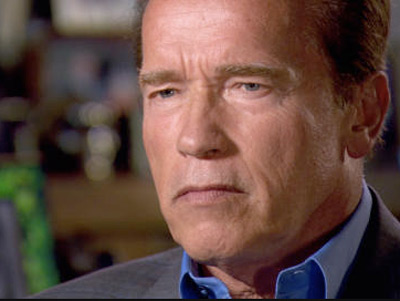 Here comes Arnold Schwarzenegger’s autobiography, “Total Recall: My Unbelievably True Life Story”  published officially today, Monday, October 1st. It was more or less panned by the New York Times yesterday. The pre-publicity has Arnold cheating on Maria Shriver before they were married, with Brigitte Nielsen., And then later with the maid, with whom he fathered a child. My sources say Maria Shriver had no idea all this stuff was going to be in the book, and she’s not happy.

Effect on the kids:  Now both of Arnold’s sons with Maria Shriver have taken her last name and jettisoned Schwarzenegger. Younger son Christopher, who just turned 15, entered Twitter as a Shriver. His father’s illegitimate son with housekeeper Mildred Baena, is just a few days older than Christopher. Son Patrick has stuck to his guns since his father’s infidelities were discovered last winter. He calls himself Patrick Shriver on Twitter. The couple’s eldest daughter, Katherine, still a Schwarzenegger, announced on Sunday night that she was taking a break from Twitter. Daughter Christina has so far also kept Arnold’s name. Interesting that the sons dropped it and the daughters retained it.

On a Tweet from September 28th, Christopher thanked Katherine, Patrick and Maria for giving him a great birthday. No mention of Arnold.

With all this press, you’d think the book would be doing better out of the gate. I suppose as Arnold does the interview circuit, it will go up the charts. But it’s not an instant hit.