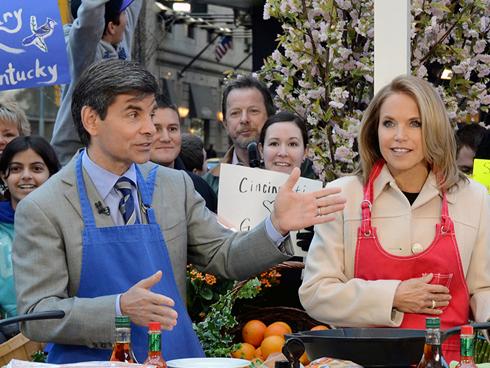 “Good Morning America” is claiming a huge victory over the “Today” show now in the ratings. “GMA” is claiming that for the first time in 17 years it has won a quarter–three months–in total ratings, and has also been number one for 28 straight days. How have they done it? I agree with “Today” show producer Jim Bell. “GMA” has taken a sharp turn into being a tabloid show without much substance. They took advantage of the confusion at the “Today” show and just went for the lowest common denominator. When they played a game show about Jessica Simpson on 9-11 that was the defining moment, I think. George Stephanopolous reduced to constant, giddy reminders that Simpson was on her way–that said it all.

The “Today” show seems clueless about what has happened, especially with Ann Curry. They’ve got to plot a way back, some kind of truce with Curry that is real, and that the audience understands. Right now, the audience is furious, and they’re taking it out on the show. Such a weird series of events for “Today,” which is so much better than “GMA” in any iteration.