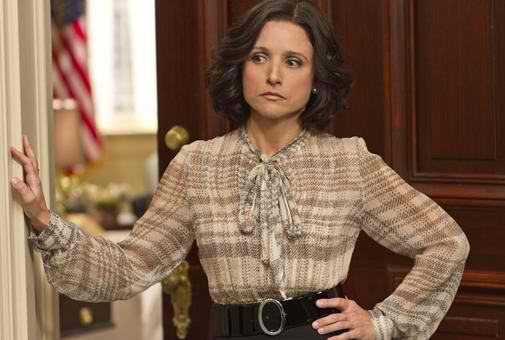 Yes it is some kind of historic moment. Julia Louis Dreyfus made Emmy Awards record books last night when she won Best Actress for “Veep.” She’s now won Best Actress three times for three different series. The others are “Seinfeld” and “The New Adventures of the Old Christine.”

Julia had formidable competition last night, especially from fellow “Saturday Night Live” alums Tina Fey and Amy Poehler. It was cute that she and Poehler had worked out a comedy “bit” about Poehler really winning, and Julia having her speec in hand.

“Veep” is brilliant satire, and I do hope it can go at least five seasons. Its creator, Armando Iannucci, is a genius from where else, Great Britain. If you’ve never seen his film, “In the Loop,” do rent it immediately. It is wicked.

Julia is lovely in person, but incredibly press shy. When you try to talk to her, she’s incredibly polite and nice but never stands still. She’s moving away. Maybe someone told her early on not to talk to press. I don’t know why–she’s had a great long marriage, a happy family and lots of success. But she’s like the female Woody Allen.

It doesn’t matter. Watching her on “Veep” is a treat beyond interviews.