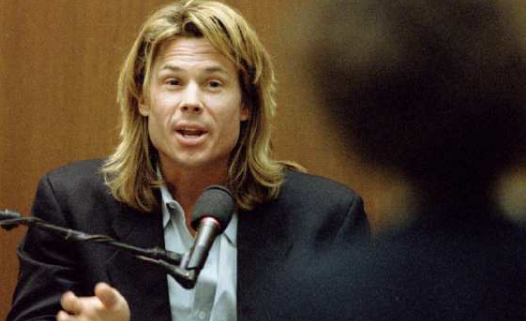 Legendary gossip columnist Cindy Adams is quoting Kato Kaelin, famed OJ Simpson double murder witness. She says Kato has told her “this minute” that Simpson killed his ex wife Nicole and her friend Ron Goldman. Kato, the ultimate Hollywood hanger-on, told Cindy the statute of limitations has run, so he can say it.

Then he recanted to TMZ.com. I have no doubt Cindy is accurate in her reporting.

Back in 1995, I broke the story that Kato — defying Judge Ito’s instructions– had made a book deal. I broke the story while Kato was on the stand, testifying to ADA Marcia Clark. We published the story in New York magazine, then faxed it to Clark at the court house. When she received, it, she asked the judge–while Kaelin was on the stand–to turn him into a hostile witness. She asked him about the book and he ‘fessed up.

Marc Eliot wrote the book from taped interviews with Kato, and sold it to Harper Collins. Once its existence was revealed, Eliot published the book anyway, dropping Kato’s byline. It’s called “The Whole Truth” and it varies tremendously from Kaelin’s testimony. Did Kaelin get the hundreds of thouands he was advanced? No one knows, but in the 17 years since then he doesn’t seem to have gained gainful employment.

When the book came out, the publisher issued a presskit interview, which appears to this day on amazon.com, with Eliot. He calls Kaelin “cowardly” and says of his testimony that the professional moocher was too terrified of telling the truth in front of Simpson in the courtroom. And this was in 1995.

A conversation with Marc Eliot Q: Why did you choose The Whole Truth as the title of this book? A: Because it’s my feeling that Brian “Kato” Kaelin did not tell the whole truth when he testified during the O.J. Simpson trial. As a key witness in a murder case he had both a moral and a legal obligation to serve the cause of justice. Instead I believe he convinced himself, or let himself be convinced, that self-promotion, as opposed to solving a murder, was the all-important issue. The Whole Truthlooks at the “truth” according to Kato Kaelin under oath, and compares it to the much more detailed, lurid and forthcoming “truth” that Kato Kaelin disclosed over the course of five months of taped interviews.

Q: What are you saying about Kato’s testimony? A:Kato testified that he never saw O.J. upset, possessive or obsessed when it came to Nicole. But in our taped conversations Kato clearly talks about O.J.’s rage at Nicole, his preoccupation with her sex life, his anger over her relationship with Kato’s friend Grant Cramer and his obsession with the provocative way Nicole dressed to go “nightclubbing” with her friends. By leaving this out of his testimony, as well as other material that he had already gone over with me, Kato created a false impression not only about the relationship between O.J. and Nicole Simpson, but also about who they were, the kind of life they led and about events that happened immediately before and after the murders of Nicole and Ron Goldman.

Q: What surprised you most as you conducted your interviews with Kato? A:According to Kato, in conversations with him Nicole literally predicted her own murder. And I’m sure he wasn’t the first person she tried to reach out to and say “this guy’s a maniac and is going to kill me!” I can only imagine that Kato was way down on the list of people she told including her mother, her father, her sisters, and perhaps even her girlfriends. What’s really shocking is that nobody seemed to care or even wanted to hear what she was saying. I was also shocked at Kato’s attitude and his seeming eagerness to tell stories about Nicole and O.J. He didn’t seem to care too much that he was talking about a woman who had befriended him and who had allegedly been killed by her own husband — also a friend and benefactor of his.

Q: What do you think will surprise readers most when they read The Whole Truth? A:The true story of the relationship between O.J. and Nicole, the lives they led individually and the details of what Kato saw the night of the murders and the days immediately following are far different from what came out during Kato’s testimony and during the testimony of others. People are no longer shocked at the thought that O.J. may have killed Nicole and Ron, or that he may or may not get away with it. They will, however, be shocked when they realize just how much O.J. did get away with before this happened and why.

Q: What were your feelings about Kato during the work process? A: I liked Kato. I found him very personable, very likable and much more observant than he lets on, as is evidenced by the amount of information he had. I found him very typical of the kind of fellow who comes to L.A. riding on his good looks and tries to somehow convert that into a career. I also found that he has an ability to get people, including myself, to open up to him. I found myself sharing private moments and thoughts with Kato that I normally wouldn’t share with an interview subject.

Q: Do you think O.J. Simpson is guilty? A: Obviously, like everyone else, I have an opinion about O.J.’s guilt or innocence. But what’s more important is how I formulated that opinion — by spending five months with a key witness and hearing a play-by-play, blow-by-blow description of his life both with the deceased and with the defendant.

Q: What things did Kato tell you that haven’t yet come to light? A:The most important material in the book, none of which Kato revealed either during his testimony or afterward, addresses O.J.’s possible motive for killing Nicole. Kato talked very openly to me about an enraged, jealous and extremely possessive O.J. Simpson. He spoke openly about a Nicole Simpson whose life was in personal sexual turmoil and who was locked in a psychological battle with O.J. What was remarkable was that Kato had a “box seat” to the on-going O.J.-Nicole battle and was able to observe it first-hand from both sides. Kato also told me about a conversation he had with Nicole’s friend Cora Fischman. A week before the murders, and just after Nicole and O.J. had one of their blowouts, Fischman had a very troubling conversation with O.J. According to Kato, Cora told him that O.J. was in one of his furies and said “She [Nicole] isn’t going to get away with this. I’m going to take care of her once and for all.”

Q: Do you anticipate that Kato will “come clean” after the publication of this book? A: I think Kato will go back on the witness stand, if he’s not scheduled to reappear already. I can’t tell you what he’ll do when that happens but at the very least he’ll be forced to confront some of his own words. And this time around he won’t get off the stand so easy.

Q: What was your reaction when you heard Kato’s testimony? A: I was absolutely stunned. I happened to have the TV on and suddenly there was Kato on the witness stand. I expected him to get up there, repeat the things he had said to me over the course of five months of discussions and blow the case wide open. I thought I knew what was coming and said to myself “This should be exciting.” Then I started hearing this highly sanitized, fairly innocuous version of events. What was particularly unbelievable was when he denied he was working on a book. I had a manuscript on my desk beside me when he said that.

Q: You include a lot of details about Nicole’s private life, her sexual liaisons, her inability to break away from O.J., her seeming attempts to hurt him, her drinking problem and her flirtation with sexual threesomes and lesbianism. Don’t you think this book will give people an excuse to blame her for her own death? A:What you come to understand in this book is the nature of O.J. Simpson’s rage. Yes, she did push his buttons. Yes, the psychological warfare went both ways. Yes, she often gave as good as she got. But her actions certainly weren’t punishable by death. I don’t think anyone in his or her right mind can say that she was the one to blame.

Q: Have you spoken to Kato again since you heard his testimony?
A:No. I was invited by his attorney to get involved in a film deal. But I’ve not said a word to Kato, nor him to me, since his appearance on the stand.

Q: Why do you think Kato sanitized or neutralized his testimony? A: Kato is cowardly. He equivocated or qualified his statements on the witness stand and tried to take both sides of every issue. Further, Kato was looking to promote himself as a likable fellow. Also, I think Kato had a hard time in the courtroom sitting 20 feet from the man who turned his life around. O.J. had tried to help him get acting work, shared the secrets of his sex life and generally brought Kato into the stratosphere of a life he would never otherwise have been a part of. And now Kato was being asked to say “I believe O.J. killed his wife.” It’s not something he wanted to face.