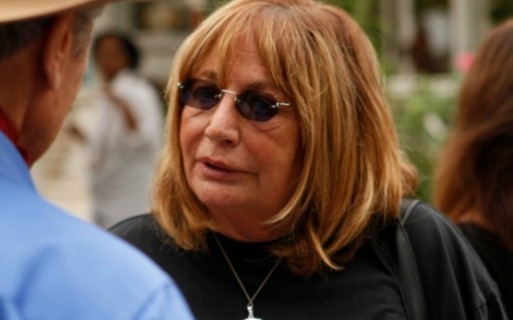 Mariah Carey made a fashionably late appearance last night at director-actress-force of nature Penny Marshall’s star studded book party. Mariah slipped into the Monkey Bar around 9pm, looking like a million bucks. Kids put to bed, Mariah was on her way to play some music from her new album for the gang at DefJam Records. But first she wanted to congratulate Penny on her funny and touching memoir called “My Mother Was Nuts”– and to show the A list who’s really on top.

Since you want to know, Mariah has survived week one with Nicki Minaj, there’s no trouble, and Mariah is even showing up on time. “It’s a struggle,” she said of her legendary lateness, “but everyone’s impressed so far. I’m right on time!”

And where was Cindy Williams, Shirley to Penny’s Laverne? “She’s in town, but she’s afraid to come out,” Penny said, shrugging. She showed me Williams’ email on her Blackberry. “See?” Shirley was there in spirit.

Penny kept complaining that there weren’t enough books around to give to friends, let alone sell them. When Angelica Huston asked about getting a copy of “My Mother Was Nuts,” Penny exclaimed: “I gave them all to my family and even then I ran out. I have a big family here!”

What a day: it started for yours truly with a surprise phone call from Jerry Lewis, and ended with dinner at Primola with legendary Lainie Kazan and producer Fred Rappoport. In between came Penny’s party, where Cindy Adams was front and center with the famed actress-comedienne-director at the stroke of 6pm. (Cindy is such a stitch, I look forward to her own column about Penny.)

A lot of people were still talking about the previous night’s historic concert memorial for Marvin Hamlisch. I did hear that Barbra Streisand taped her segment for Katie Couric’s new talk show, and it will air next week. Barbra’s album, “Release Me,” comes out on vinyl on Tuesday, and on CD the following week.

Meantime, Penny was shooing away a female reporter with a tape recorder from interviewing Mariah while the pair caught up with each other. I was sitting in the next booth and all of a sudden heard, “No no no, it’s a party! Jeesh!” in a raspy voice. Penny shrugged. What could she do? Her mother was nuts.