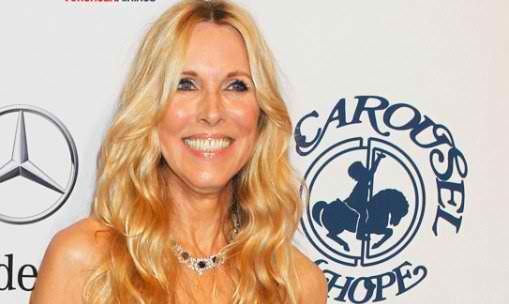 Alana Stewart is one of Hollywood’s great gals. Gorgeous, twice married to stars, best and devoted friend of the late Farrah Fawcett, she always has seemed to have it all. But Alana has not had it so easy. Her memoir, “Rearview Mirror,” is refreshingly honest about all of it– George Hamilton, Rod Stewart, three kids who’ve needed a lot of attention.

What’s so great about “Rearview Mirror,” which just hits stores this week, is that Alana not only tells it like it was, but she’s pretty candid about herself, too. She and Rod battled — a lot. “We were 50/50 responsible for our marriage,” Alana told me yesterday, a marriage that produced two kids–Sean and Kimberly. Her eldest son, Ashley, is from her marriage to Hamilton. They didn’t battle, really, and became great friends over the years. Not so much with Rod, who has his own book coming out shortly. “I called Rod and I told him I was honest about him in my book,” Alana says, “but I don’t think I was mean.”

She’s not, at all. When you read “Rearview Mirror,” you immediately want to have lunch with Alana. Her book is breezy and she wrote it all herself. She had to cut a lot out–so there may be a sequel. She didn’t get into son Ashley’s marriages, or any extraneous gossip. “I kept it to the stories that affected me,” she says.

Alana Kaye Collins came from real poverty in Nagadoches, Texas. Her mother (she never knew her father) had drinking and substance abuse problems that Alana says skipped a generation and hit all of her kids. She’s been working with her kids and solving those problems her whole life. She was raised by a loving grandmother, then came to New York. Eileen Ford hired her to model, and the rest is history. She didn’t do drugs, and didn’t sleep around. She and Hamilton had a real romance, and when their marriage ended, Rod Stewart was just about next.

A lot of Hollywood folks from the 70s pass through the book: Steve McQueen, Elton John, Carole Bayer Sager, Farrah Fawcett, and so on. There’s particularly revealing, and sweet, passages about Rod’s friendship with Elton John. (They were not lovers or anything.) Mick Jagger with either Bianca or Jerry Hall makes appearances.

Alana is funny in real life and she translates it into the book. In one scene, she’s trying to take son Ashley to rehab. He’s very disheveled. (Ashley has since become a sober, successful actor.) George, she notes, shows up to meet them at the airport dressed like a GQ model, not a hair out of place. (“You have to laugh at the idea of this,” Alana says lovingly.)

Alana is very open, and funny, about the all the therapists who’ve come and gone on her journey. Marriage and drug counselors galore! She told me: “I’ve tried everything except Scientology.” Marianne Williamson has been a big help. She liked Kabbalah. But in the end, she still goes to church, regular church. And somehow she’s come out of this standing up straight. She’s even a grandmother now. And unbelievably, she’s 67–the hottest 67 year old around.

PS Alana picked up an acting prize last year for her work in the indie film, “Delivered.” She says she was shocked. But throughout her career, Alana has acted in films, on TV and on stage. Note to more indie directors.