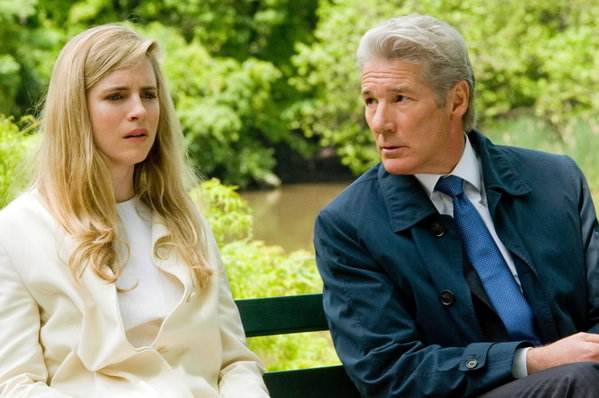 Surprise, surprise. While we’re all getting misty eyed over “The Master” selling out all its seats this weekend, there was another hit. “Arbitrage,” directed by Nick Jarecki, starring Richard Gere and Susan Sarandon, really did very very well. The Madoff like saga of a Wall Street guy who seems to have it all but is way in over his head did just over $2 million at the box office. It finished 12th for the weekend. And those were pretty big accomplishments considering “Arbitrage” is only playing on 197 screens.

Director Jarecki is very excited, sending out emails to friends to help in his cause. I think he’s as surprised as anyone else. Some thing about “Arbitrage”: it’s a very well made film, very entertaining, and of course, very well acted. Gere does his best work since my last favorite film of his, “Hoax.” Susan Sarandon is top notch and very fetching, as usual.

The Madoff angle has not been publicized too much, but I think the audience gets it. Gere’s character is rich, and his family benefits from his largesse. But his daughter (played by Brit Marling) works for him and sees that something is terribly wrong. The whole enterprise of Gere’s hedge fund is based on a lie. If he can’t maintain his high wire act, he will be exposed, and the whole carnival over which he’s presiding will collapse. He will go right to jail.

“Arbitrage” may be the sleeper hit of the fall, just the way “Margin Call” was last year. I think it’s a little early for Oscar prognostications. But Gere and Sarandon are magic. “Arbitrage” should turn out to be a nice little hit. Kudos to producer Laura Bickford, who really championed this project and brought it to fruition.