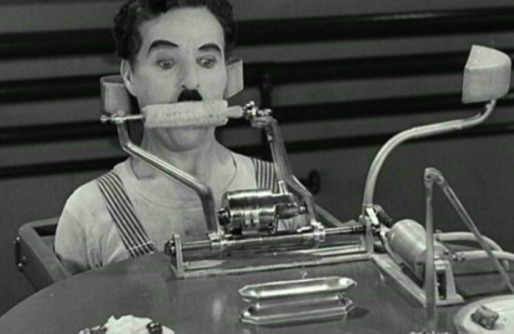 You’d think after every bad thing this country did to Charlie Chaplin we could leave him alone. Apparently not. A version of his life story, poorly and inadequately told, is now on Broadway. I suppose if you have nothing else to do, or don’t know a thing about Charlie Chaplin, then you could see this musical. It’s a like a Cliff Notes version of a complex interesting story. Someone named Christopher Curtis has simply butchered the whole thing.

On the plus side: a talented cast, featuring Robert McClure as Chaplin, do their best to overcome the inanity. If they’d been given something to work with, like original songs, that would have helped. But the music is a generic mishmash of stuff plucked from Broadway wastebins. So many melodies from other shows, including quite a bit from “A Chorus Line.”

How could you make a musical about Charlie Chaplin and omit the key scene of his life–not being allowed to re-enter the United States because you’re accused of being a Communist? And Chaplin had been a fervent fundraiser for US War bonds. He was completely patriotic but he saw himself as a citizen of the world. The musical just fails to mention this episode. It was J Edgar Hoover who engineered his ouster in 1952, seven years after the end of World War II, during the Blacklist and Sen. Joseph McCarthy’s witch-hunts.

Also, through the whole show there’s a set that reads: Chaplin Studios. That’s fine, that’s where his films were shot. (The studio eventually became A&M Records, and Henson Studios. It’s the place where “We Are the World” was shot. It’s a popular recording studio now.) But Chaplin was the original partner with Mary Pickford and Douglas Fairbanks in United Artists. That was their film studio. This is also omitted, a huge error. They were the first indie film studio.

And then you think of the missed opportunities: how about a musical number fashioned out of “Modern Times.” The feisty McClure would have been more than up to recreating the office-desk scene. But someone would have had to write a song. And no one with this show is capable of that.

Also missing from the show: Fatty Arbuckle (he’s in the background in an early scene) and Mabel Normand. No, you can’t make “Chaplin” into a mini series, and it’s hard to do a whole life in two hours with songs, but try to get some of it right, dammit, with a dash of wit and maybe some lyrics and songs that reflect this man’s genius. I guess the producers of this mess couldn’t license “Smile,” but maybe there could have been a reference to the song that Chaplin wrote and is now among the most known in the world.

“Chaplin” won’t be around for long. See it for McClure and the rest of the cast, and the one good scene–about “The Great Dictator.” It can’t hurt you, it’s September. and “Chaplin” could get a few people interested in reading Chaplin’s 1964 memoir and David Robinson’s 1994 biography.