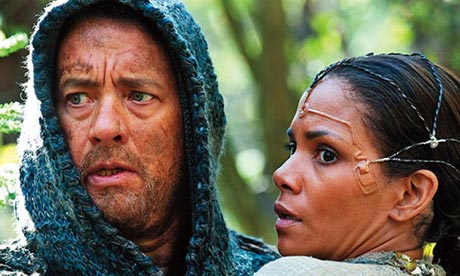 The Wachowski Brothers, now the Wachowski siblings, premiered “Cloud Atlas” on Sunday at the Toronto Film Festival with screenwriter Tom Twyker. It’s a three hour movie and has Tom Hanks and Halle Berry taking on six roles each. Other actors also sextet it up including Jim Broadbent, Jim Sturgess, Susan Saranson, and Hugh Grant. The movie spectacle will be nominated for Best Make Up and Costume Design next winter just for its audiaciousness.

The big news at yesterday’s screening was the appearance of the Wachowskis and Twyker before the film began. Of course everyone is interested in the new Wachowski sister, Lana. She has sort of crazy Whoopi Goldberg hair, except maybe red, and an oddly high pitched scratchy voice. But is also exuberant and ready to promote her work, which is more than you can say for her predecessor. I do think the novelty of her transformation will disappear quickly.

And another plus: I never understood “The Matrix” sequels, and “The Matrix” itself always seemed cold. “Cloud Atlas” has a lot of dots to connect and may take a while to figure it all out. But it’s beautifully made. And its separate pieces are invidiually well told, with lots of character development and beginnings, middles and ends. So it’s quite possible to enjoy the pieces even if you can’t quite grasp the whole.

Hanks and Berry are the stars with the biggest roles, but honestly Jim Broadbent and Jim Sturgess are right behind them. Broadbent’s main story is that of a vanity book publisher who winds up being placed in a nursing home by his evil brother. (It’s a long story.) Broadbent also plays about five other charactes in different stories. Sturgess’s central role is as an officer on the high seas trying to save an African man destined for death or slavery. They are each terrific.

There are also multiple roles played by Susan Sarandon, Hugh Grant and Hugo Weaving, as well as a few Asian actors. It’s all lots of fun, like to trying to play “Where’s Waldo?”

Of course, the basic notion of David Mitchell’s novel, and now the Wachowskis’ movie, is that we are all connected, through time, generations, karma, and space. It’s very new-agey, but not in a precisely preachy way. Even when the concrete connections between the stories is unclear, the vibe is always right. And it’s never boring. The Ws keep the action moving briskly. Trust me, you can’t fall asleep in this movie even if you wanted to.

And who knew Tom Hanks and Halle Berry would so well together on so many different levels? They really click, invidually and separately. Halle has another storyline, too, with the sensational veteran actor Keith David. But she and Hanks are the tentpoles of the film, and you’re always looking for the progress of their characters.

“Cloud Atlas” is a big entertainment. There’s a nice mixture of entertainment and drama. Hanks and Berry will get the most attention (aside from the makeup) but don’t count out Broadbent. He’s a gift in a movie of dozens of little well wrapped glittery packages.