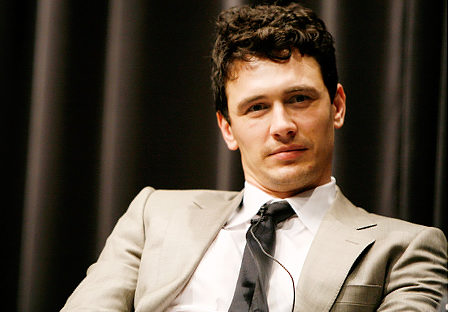 I’m not much of a Harmony Korine fan to say the least, so if “Springbreakers” — at the Toronto Film Festival– had turned out to be “Kids” but set in St. Petersburg Florida on spring break, I would have left the theater. (I thought “Kids” was vile and still do.)

However, into this extremely much better made Korine film comes James Franco, after about twenty minutes. And then he steals the movie, at the same raising it to a much higher level than anything to which it aspired as the white rapper, drug dealing Alien. He’s a keeper, a classic character from any repetoire.

But “Springbreakers” is all about Alien, and all about Franco. The actor breathes life into the movie. Alien is like a big helium balloon who keeps getting bigger and bigger until he finally pops. Franco, shirtless and covered with tattoos, also sports a silver “grill” on his teeth, cornrows, and has a condo where he stores a significant amount of drugs and weapons. He’s not Tony Montana from “Scarface,” whom he idolizes. He’s more like the freakazoid version. Alien is also goofy — sort of a psychopath with a heart of gold.

Franco is getting criticism for trying too many things at once–art, school, film, soap operas. But “Springbreakers” shows why he has his Oscar nomination and and other awards. He is top notch in his generation, a very serious actor first and foremost.