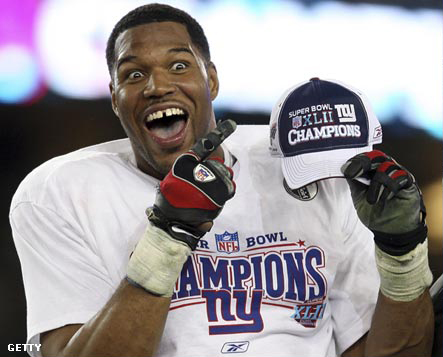 Michael Strahan was just announced and presented as the new co-host of “Live.”  There’s some kind of weird synergy in the choosing of Michael Strahan as Kelly Ripa’s new permanent co-host today. Strahan played his whole career for the New York Giants. Wasn’t someone else connected to “Live” once a Giant legend, kids? Yes, Frank Gifford, husband of Kathie Lee, Regis’s long time partner before Kelly. And so it goes, the circle will not be unbroken. Let’s hope Straha takes a page from Regis Philbin’s playbook– he’ll have to go out three or four times a week, and bring back some good stories to entertain Kelly and the audience. What’s really cool: the new trend for African American male co-hosts of entertainment shows. Kevin Frazier’s on “The Insider.” E News just announced Terrence Jenkins as their co host with Giuiliana Rancic, and now Strahan. Maybe the world is evolving after all.