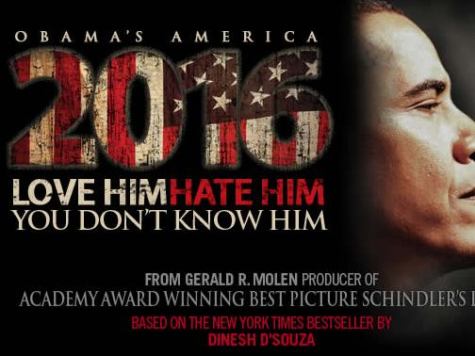 The anti-Obama movie, “2016: Obama’s America,” hit number 2 on the box office chart on Monday night. The slanted documentary now has $10.4 million in its till after taking in an additional $1.2 million Monday night.

The doc surged as a replacement for the actual Republican National Convention, which postponed its start because of a possible landing by Hurricane Isaac in Tampa.

Alas, nothing happened, but that was to the benefit of Rocky Mountain Pictures and Dinesh D’Souza and Niall Ferguson, who put this thing together. It will be interesting to see whether “2016” does as well the rest of the week when it’s competing with the actual convention.

“2016” was produced by Gerald R. Molen, who got his start executive producing the film version of “Bright Lights, Big City,” about massive cocaine use and nightlife partying in the early 1980s in New York. After a stint working for Steven Spielberg, Molen went on to produce a trio of Mormon cenric flops. (This has nothing to do with Mormon life, just the quality of the movies, kids.)

Last night the convention rolled along, with speeches by Ann Romney and Chris Christie in the spotlight.