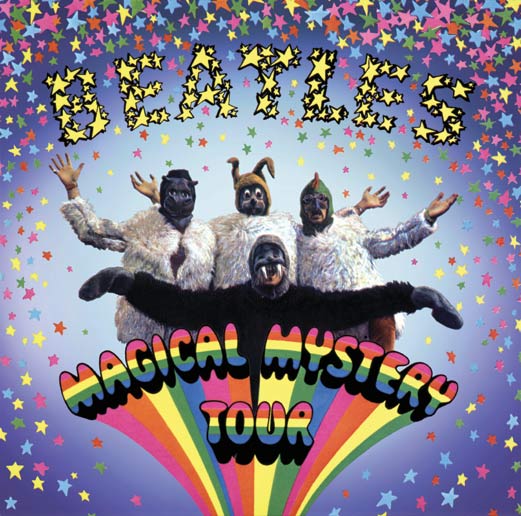 Is it really happening? The Beatles’ film “Magical Mystery Tour” is finally coming to DVD and BluRay in proper condition. There’s also a theatrical release on September 27th. “MMT” follows a restored “Yellow Submarine.” What’s next? Can we dream: “Let it Be”? OMG. Anyway, you can read all this beatles.com or here:

In September 1967, The Beatles loaded a film crew onto a bus along with friends, family and cast and headed west on the A30 out of London to make their third film, this time conceived and directed by The Beatles themselves.

“Paul said, ‘Look I’ve got this idea’ and we said ‘great!’ and all he had was this circle and a little dot on the top – that’s where we started.” (Ringo)

In the wake of the extraordinary impact of the Sgt. Pepper’s Lonely Hearts Club Band album and the One World satellite broadcast of All You Need Is Love, The Beatles devised, wrote and directed their third film, Magical Mystery Tour, a dreamlike story of a coach day trip to the seaside.

A special, boxed deluxe edition will also be available, and, for the first time ever, there will be a limited theatrical release from September 27th.

This new release also feature three new edits of some of the song performances, as well as scenes that were cut out of the original film.