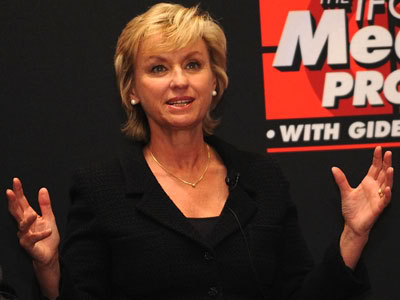 I’d love to be a fly on the wall this morning at Barry Diller’s IAC Corporation. Diller has sunk millions and millions into the Daily Beast and Newsweek. He’s also recently given — with wife Diane von Furstenberg–over $70,000 to Barack Obama’s re-election campaign, not to mention thousands more to other Democratic candidates and committees.

But this morning the Dillers will be fielding calls from friends asking why Tina Brown has put a story on the cover of Newsweek called “Hit the Road Barack.” She’s given British conservative Niall Ferguson free rein to denounce Obama and declare his presidency over.

The piece is cited as absurd in many other publications such as Slate http://www.slate.com/blogs/moneybox/2012/08/19/niall_ferguson_s_absurd_critique_of_obama_in_one_chart.html

But Brown –who was once described her husband, Harry Evans, on “60 Minutes,” as having “rat like cunning”–is not concerned about the actual election or Obama. It’s all about her own survival. Newsweek is essentially dead since the Harman family announced they were getting out of their partnership with Diller. Then Diller said Newsweek would likely cease print publication. Brown, desperate, has simply gone to her action of last resort–zig right, and pick up the Rush Limbaugh right wingers.

It’s her last ditch effort to find someone who will read Newsweek. Clearly liberals were not. While Time magazine is booming, Newsweek languishes. The Daily Beast is second to The Huffington Post. What to do? With the Ferguson cover story, Brown throws herself on the mercy of the Empire. She polishes Darth Vader’s helmet. It’s just like when Flash Gordon would find his girlfriend hanging around with Ming the Merciless.

Let’s not forget: only a couple of weeks ago, Brown was called Romney a “wimp” on Newsweek’s cover. I guess that didn’t sell. And let’s not forget January’s “Why Are Obama’s Critics So Dumb” cover.

Better yet: the discussion at home this morning. Brown now joins Rupert Murdoch politically. Murdoch is the former employer of Evans, who has a low regard for the News Corp publishing titan. I can’t see Harry Evans backing Mitt Romney. But then again, even he knows it’s not about that this morning. The Beast must be fed.

But the question is, will Romney-Ryan supporters believe Newsweek really endorses “Why Obama Must Go”? Will they suddenly start buying this altogether moribund magazine? And will this be the beginning of a weekly turn to the right for Brown if it works? How long before Clint Eastwood is on the cover? The Daily Beast will have a lot of access in Tampa, that’s for sure.