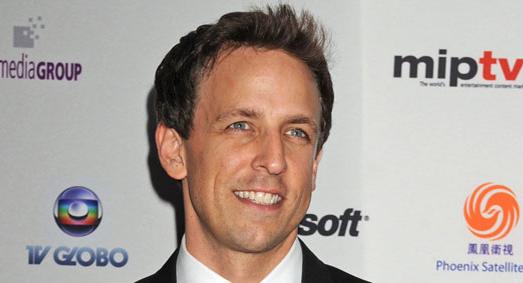 Anything can happen, and I am hedging my bets, but: as I wrote several weeks ago, Seth Meyers is still the leading candidate to join Kelly Ripa as co-host on “Live!” when it returns on September 4th. (The day before, Kelly is going solo.) Myers has demurred but never actually said he wouldn’t be taking the job. He’s the only guest host who did a five days in a row gig with Kelly, and it was during July sweeps. He says he loves his “Saturday Night Live” job, but if Meyers wants more after 11 years, co-hosting with Kelly would be a perfect transition into bigger things.

The other possible candidates have conflicts, too. Unlike Meyers, though, their conflicts are outside of New York, and they live away from the Big Apple. Michael Strahan is tied up in Los Angeles every Sunday with Fox NFL Sunday. Joel McHale still has the sitcom “Community” on NBC, from Los Angeles. Josh Groban has a demanding concert schedule, and is recording a new album. Nick Lachey, frankly, is not up to the job, although some kind of show hosting looks like it’s in his future.

All of these guys could do it, if they had to. But the centerpiece of “Live!” is the host-chat, developed by Regis Philbin. And a lot of that has to do with going out in New York during the week, seeing people, and having funny stories to tell the next morning. Merely quipping, or reading from newspaper clips, headlines, topics of the day–that’s not what made “Live with Regis and…” a success for 29 years.

The only other person who, like Meyers, is ready for that responsibility? Local fave Pat Kiernan from New York 1 News. He wants the job, people like him, he’s funny, spontaneous and, importantly, here in New York. Don’t count him out.

Michael Gelman is great at building up suspense, so what him and the “Live!” pr people work the press over the next two weeks so that the tune in on September 4th is crazy. Could it be someone who didn’t serve as guest host during the last nine months? Maybe. But unlikely.