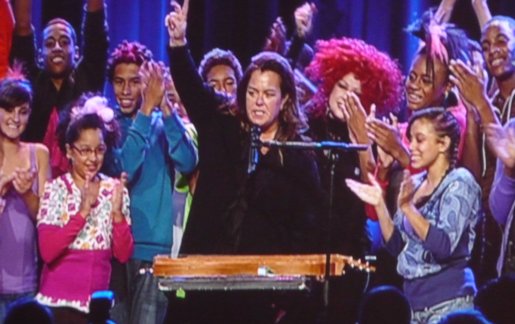 EXCLUSIVE: Rosie  O’Donnell had a real and serious heart attack last week.  She just blogged about it on www.rosie.com.  Rosie nearly died from what is known the Widow maker.  According to her posting shevwas 99 percent blocked. She received a stent during angioplasty and is home, recovering. The attack seems to have been brought on by act of good will. Rosie helped a heavy woman out of her car in a parking lot. The strain may have caused the attack. Wisely she immediately took a Bayer aspirin. “Saved by a commercial,” she quips. Rosie’s already had a stressful summer with the illness of fiancee Michelle Rounds. But Michelle’s improving, I am told. Rosie, get better soon!

its a semi-sunny monday
the light bouncing off the flat hudson
mish is sitting next to me
i am happy to be alive
last week i had a heart attack
here is what happened
on tuesday morning
while walking in a parking lot in nyack
i heard a loud commanding voice
“can u help me”
more of  a demand than request
a challenge – a plea
i turned and saw an enormous woman
struggling to get out of her car
she was stuck
“can u help me? she asked again
as i walked toward her
“oh u r rosie odonnell”
yes i am
the ghost of christmas future
me – if i did not wake
there r no accidents i thought
as i braced myself and lifted her
it was not easy
but together we did it
she was up and on her way
with gratitude
a few hours later my body hurt
i had an ache in my chest
both my arms were sore
everything felt bruised
muscular – i thought
strained or pulled tissue
i went about my day
the pain persisted
i became nauseous
my skin was clammy
i was very very hot
i threw up
maybe this is a heart attack
i googled womens heart attack symptoms
i had many of them
but really? – i thought – naaaa
i took some bayer aspirin
thank god
saved by a tv commercial
literally
i did not call 911
50% of women having heart attacks never call 911
200,000 women die of heart attacks
every year in the US
by some miracle i was not one of them
the next day i went to a cardiologist
the dr did an EKG and sent me to the hospital
where a stent was put in
my LAD was 99% blocked
they call this type of heart attack
the Widow maker
i am lucky to be here
know the symptoms ladies
listen to the voice inside
the one we all so easily ignore
CALL 911
save urself