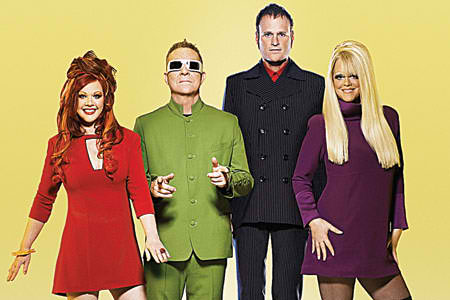 Ready for entertainment at the Democratic National Convention? It’s been so hard to book acts for either Democratic or Republican gatherings that prices for acts have gone through the roof. The non partisan Creative Coalition gives a concert each in Charlotte and Tampa.

For the former, the Coalition is paying the B52s $100,000 to entertain its guests. Sources say super groups like Fleetwood Mac were asking crazy prices, like $2 million. The Creative Coalition is almost all sold out in Charlotte; the B52s proved to be a big draw.

In Tampa, TCC has Journey, revived by “Rock of Ages” and the improbable rejuvenation of “Don’t Stop Believing.” TCC is not paying Journey’s fee– said to be in the high six figures–because they’re simply the designated charity and not the sponsor.

Pitbull and the Scissor Sisters are playing a SuperPAC party for Democrats. Rapper/ actor Common is also signed on for a concert.

More importantly, Sheryl Crow and James Taylor will entertain the people at Bank of America Stadium on Thursday, September 6th before President Obama makes his acceptance speech. More artists are expected to be added.

I’ve been in Charlotte, North Carolina all weekend–not to plan for the DNC but to visit some cousins. And you can bet the town is abuzz with plans for the Democratic convention. Some notes:

First of all, the Convention is shortened by a day. It only runs from Tuesday to Thursday. Monday, which is Labor Day, will turned over to something called Carolina Fest, a street fair. Most political conventions begin on Monday night. And yet, hotels here are insisting on a five day minimum.

The main hotel is the Westin, which is smallish. There are only a handful of  hotels in downtown –make that Uptown–Charlotte besides the Westin. Most participants will be lodged miles and miles away from Uptown Charlotte. With traffic closures imminet, no subway, an iffy bus system and no room for private cars or cabs, you can see trouble on the horizon.

All the glitzy parties will be located in one area on South Tryon Street. The Bechtler Art Museum, The Mint Museum, and their immediate campus will host the best events. At the Bechtler today, the rumor is that Bill Clinton is speaking at some event on Wednesday, September 5th.

Meantime, I give a lot of credit to the B52s. I first bought “Rock Lobster” as an indie single in 1979. And they’re still bouncing around. Good for them!