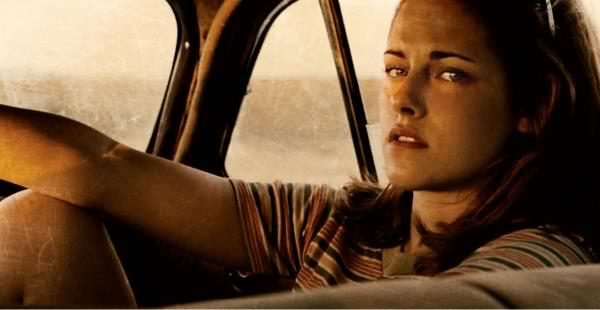 By the time the film version of the quintessential American novel, “On the Road,” opens in America, it will be the movie’s very last stop. The Walter Salles directed adaptation of the famed Jack Kerouac classic has already opened in four countries. It will open in two dozen more before it finally hits American theaters on December 21, 2012. A movie about being lost in America is lost in distribution.

Indeed, “On the Road” is so screwed up at this point that it had its UK premiere in London three days ago. But it doesn’t actually open there until October 12th. Neither of its big stars–Kristen Stewart and Garrett Hedlund–even showed up for that premiere. It’s not clear what the point was at all.

The movie had its worldwide debut back in May at the Cannes Film Festival. Critics were lukewarm. Rottentomatoes.com has given it a 40% score, with pretty much everyone checking in. In the four countries where it has played to audiences, “On the Road” has a total box office of just over $4.2 million.

Now it will roll out in spurts around the world. In early September, “On the Road” will get a premiere at the Toronto Film Festival. It almost seems like an afterthought since it won’t be released in the U.S. for three more months. There’s no momentum whatsoever marketing wise.

What a shame. “On the Road” was published in 1957.  The saga of its journey to film is a long, storied one. Francis Ford Coppola tried to do in the 1990s. Casts came and went. Salles, a very good director, made such a success of “The Motorcycle Diaries,” that he seemed like a good choice. But something went wrong in the translation.

“On the Road” also now comes with a little unwanted baggage. Kristen Stewart, who’s a minor part of the film, has been played up as one its stars. But this summer she earned a scarlet “A” for her affair with the married director of her “Snow White and the Huntsman.” Rarher than be stoned in public, Stewart skipped the throwaway UK premiere. Her level of promo participation in the future is unknown.

Of course the saddest part of this story is that in order to publish it on the internet, I had to put Stewart’s name in the headline next to “On the Road.” Jack Kerouac is either laughing or spinning in his grave. And this is why “The Catcher in the Rye” will never ever be made into a movie. J.D. Salinger’s estate will never allow a headline that reads “Justin Bieber Movie Catcher in the Rye…” and so on. Lesson learned.

“On the Road” is not without its charms. Todd McCarthy liked the script, and I did, too. Hedlund is very good, Sam Riley is fine, and Kirsten Dunst puts in a fine performance. Does it capture Kerouac and the real nature of Beat writing? No, it can’t. But it will at least direct audiences back to the original text and maybe a rediscovery of Kerouac. And that’s something.

Me? I would have relesed it in October. It’s not an Oscar movie.  For Hedlund and Dunst to get some awards buzz, they would have needed that ramp up time. But no one asked me. And the December field is so crowded, “On the Road” is likely to be road kill by that time.