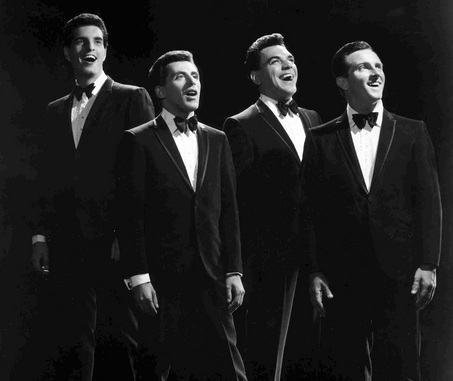 “Jersey Boys.” the story of Frankie Valli and the Four Seasons, is still a big big hit on Broadway. But come October 19th, the fake Jersey Boys played by actors will have to compete with the real thing. Frankie and his current crop of Four Seasons are going to do a run of shows at the Broadway Theater to commemorate their 50th anniversary. Valli never had a great deal with the “Jersey Boys” producers, but he’s kept going, and capitalizing on the musical’s popularity. It will be great, though, to hear his unique falsetto on “Walk Like a Man,” “Sherry,” and “Can’t Take My Eyes off of You.” Tickets go on sale August 23rd for the seven performances. This is a big 50th anniversary period–Barbra Streisand is celebrating hers at the Barclay Center at the same time while the Rolling Stones are trying not to miss theirs.