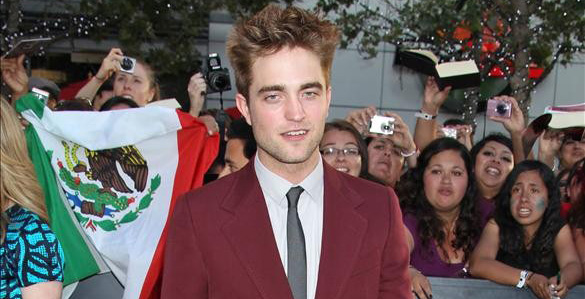 Robert Pattinson, overhyped and cuckolded, comes to New York on Monday to promote David Cronenberg’s “Cosmopolis.” Is he a star, an actor or a celebrity? I’d say choice number 3 by the looks of things. Outside of the phenomenon known as “Twilight,” Pattinson is a stiff at the box office. In June he starred in “Bel Ami.” The total take? $120, 462. The film was a total write off even though it made $7 million abroad.

The excruciating “Water for Elephants” preceded “Bel Ami.” It made $117 million around the world including the U.S. This was a fraction of the “Twilight” dough. Pattinson did nothing to bring in his fans. “Remember Me” came before “Elephants.” The US total was $19 million. Again, no sign of ardent fans at the popcorn stand.

“Cosmopolis” is not one of Cronenberg’s best. I suppose after “A History of Violence,” “Eastern Promises,” and “A Dangerous Method.” he could be a little burnt out. Three great films in a row. You knew “Cosmopolis” was bad when it was chosen to close Cannes this year. It’s a dubious distinction to close a festival. Everyone’s gone home, the press has already picked their favorites, and the party is over.

Pattinson now comes with a full set of matching baggage, too. Because he’s been part of a live soap opera all summer, the press and media have been banned from attending the premiere Monday night. R-Patz will grunt his way along the red carpet, answering nothing while screaming girls scream at him, hoping for a sign of vampire teeth. They will not see “Cosmopolis” either out of boredom or because their parents won’t let them. Critics are already drawing more blood than Taylor Lautner at midnight. “Cosmopolis” has a 66% rating on rottentomatoes.com, falling faster than the stock market on a bad day.