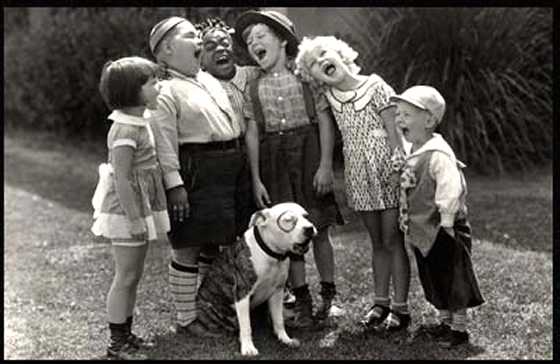 When I started writing this item, I kept humming Garland Jeffreys’ famous song, “Don’t Call Me Buckwheat.” Believe it or not, there’s a casting call for another big screen version of “The Little Rascals.” That’s right. Universal has greenlighted a big screen version of Hal Roach’s classic Depression era kids series. Newly minted director Alex Zamm, who has a long list of video titles on his resume, and a producer named Mike Elliott, who may be the same guy on the imdb to make “Death Race Inferno” and “The Beast Among Us” are in charge.

They’re looking for a bunch of cute little kids quickly. Why? If they can get them now, they say on the casting sheet, “we can school them in Sept. and bank hours.”

From the casting sheet– STORY LINE: When their beloved adopted GRANDMA is about to lose her bakery to scheming millionaire,
BIG RAY KAYE, the LITTLE RASCALS try to raise the money to help. But their hare-brained schemes,
masterminded by SPANKY, result in comical disaster. Their last hope is performing on a television talent show, but the kids are up against some notably glitzy competition, and their ragtag band has an uphill battle
if they hope to win the big cash prize…

“The Little Rascals” were a TV series in the 1950s when television was new. But they were actually repackaged movie serials from from the late 1920s into the late 1930s.

There was another “Little Rascals” movie in 1994. It was a disaster. Directed by Penelope Spheeris, it grossed $51 million and is largely forgotten.

As much as anyone over 50 might have some nostalgic feeling for Spanky, Buckwheat and friends, that ship has sailed. Also, except for Jackie Cooper, most of the original Rascals had terrible lives as adults. Now that would make a great movie! For example, Alfalfa– Carl Dean Switzer– was shot to death at age 31.

George “Spanky” McFarland, who went on to become a TV executive, died of a heart attack at age 64. The original Buckwheat, however, played by Willie Mae Taylor, made it into this late 80s and left a big family. But he only had one year of the serials. Billie Thomas, who replaced him as Buckwheat, died of a heart attack at age 80, three months after a “Rascals” reunion.

The best story might be of Darla Hood. She died at age 47 after making 150 episodes of the series. According to the imdb, she struggled in Hollywood as an adult, had a couple of marriages and starred in one of Vincent Price’s horror films. She sounds like a Tim Burton movie.