The Hollywood Foreign Press Association made a big announcement yesterday: they gave $1.2 million away this year to film-related charities. What they didn’t say: they also spent at least three times as much– $3.7 million– on legal fees.

The HFPA has been in a barrage of lawsuits in the last three years, from their former publicist Michael to their ongoing court dispute with Dick Clark Productions. Their beef with DCP is a claim that the producer of the Golden Globes TV doesn’t have the right to negotiate directly with NBC. The HFPA lost part of the case and filed an appeal, pushing the lawsuit into 2014- and adding millions more in legal fees.

But think of this: HFPA is likely spending NBC’s money to defend itself in the lawsuit against Dick Clark, in order to get away from…NBC. As the president of the Golden Globes told Variety this week: “We’re very happy to be able to get the money from NBC and give it away.”

HFPA made a big deal about the $1.2 million giveaway. But they actually gave $300,000 less in charitable donations this year, despite raking in more money than ever from NBC for licensing the Golden Globes name.

Spokesman for the HFPA Michael Samonte emailed me: “They’ve set aside $30,000 in discretionary funds to be used throughout the year. With these additional contributions, the organization plans to match last year’s record-breaking sum of $1.5 million in donations.”

There’s also the mysterious listing on their Form 990 for “other expenses.” That number doubled from $2.3 million to $5.7 million. There’s nothing specific listed there. But it could be that’s their amount for legal fees.

HPFA also spent over $676,000 on travel expenses even though a great deal of their travel is paid by the studios. 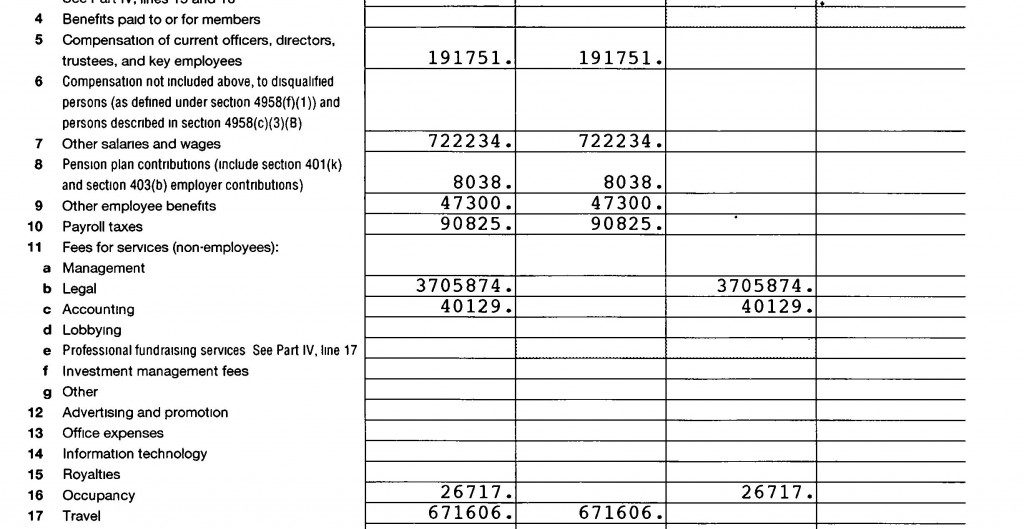