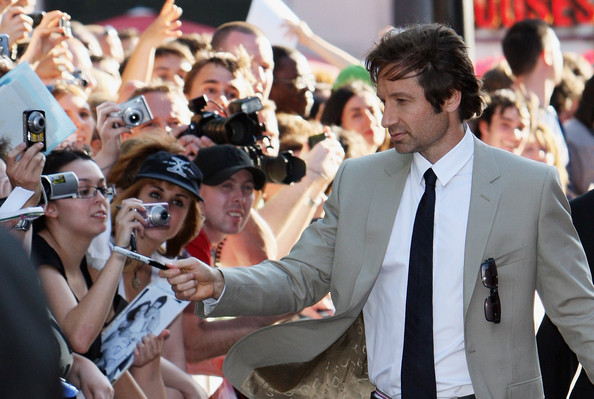 The truth is still out there. David Duchovny told our LEAH SYDNEY at the Hollywood premiere of his new movie “Goats’ that that he’s ready for another visit into the unknown with co-star Gillian Anderson. (And no, the two are not dating, despite tabloid reports. Duchovny, a well known dater, was spotted chatting  two different comely blondes at the premiere. He’s divorced now from Tea Leoni, so it’s okay.)

David Duchovny said:”When I come to LA I rent the house from (“X Files” Creator) Chris Carter, so we’re still very close.  He’s been talking about having a story that he wants to do. I know Gillian wants to do it, I want to do it, so we’re all on board.  I will do it till I can’t do it anymore.  I love the  characters, the people involved, I love the whole thing.  So it’s a big yes from me.”

What’s next for him? “A submarine cold war thriller called “Phantom,” with Ed Harris and William Fichtner.  I’ve seen three quarters of it and it’s really good. It’s based on a true story. I wasn’t a big fan of submarine movies, I didn’t really know them.  It was shot on a submarine, so that gives you a different kind of anxiety.”

Did he bond with Ed and Bill?

Duchovny joked:  “Yeah, in a submarine kind of way.”

Duchovny plans on directing a couple of indie films himself. He already has “The House of D” under his belt.  Of “Goats,” which has been roundly panned by critics, Duchovny is still a supporter.  “I love this movie,” he said.  “It’s a sweet, smart funny coming of age movie.  It’s a hard movie to get made in this day and age.  I hope this film catches fire, it deserves it.”

Also at the premiere were some of David’s “Californication” co-stars, Jason Beghe, Evan Handler, Marilyn Manson and Pamela Adlon, as well as managers Robert Semon, the wonderful Melanie Greene and Showtime’s Gary Garfinkel.  We also caught up with one of our favorites, actor Jason Schwartzman.  Jason is also an accomplished musician with his band “Coconut Records.” Jason, along with Woody Jackson, wrote the score for “Goats.”  He told us, “We did the whole soundtrack in two weeks.  I want to do more soundtracks.  I’m on the market!”