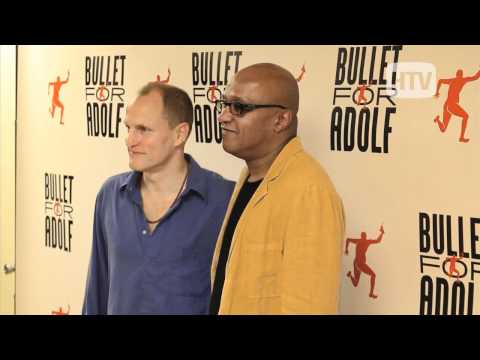 Woody Harrelson has conquered plenty of fields in entertainment, from TV to movies. So last night’s premiere of the play he wrote with pal Frankie Hyman was another high water mark– and I do mean high. With Woody, it’s not Chanel No. 5 you sniff when he gives you a hug. (Harrelson is one of the nicest, most mellow fellows in showbiz.) Woody directed “Bullet for Adolf” and it opened last night at New World Stages, a cool theater complex just west of the theater district on 50th St. and Eighth Avenue. A lot of his friends showed up including Tony Danza, singer Peter Cincotti, producer Bonnie Timmermann, music producer Russ Titelman, famed magician and performer David Blaine. and director Oren Moverman.

“Bullet” is well directed; the diverse cast of newcomers mostly are very talented, and with Woody they’ve achieved a great rapport on stage. There’s a nice ease to the production. The play is part sitcom, and part Sam Shepherd with a little “House of Blues Leaves” thrown in. Hyman, who is black, was born in Harlem, moved to Texas, where he met Harrelson, and now lives in Los Angeles. They’ve been friends for most of their lives, he told me. The result of their collaboration is a play with black and white actors–nice to see for a change–where everyone is equally goofy. Conventional critics won’t like “Bullet,” but summer audiences will.

A special shout out to Nick Wyman, president of Actors Equity and a Broadway veteran with 15 shows on his resume including “Phantom” and “Les Miz.” He’s one of those guys who you see and say, “I know him, what’s his name?” In “Bullet” he plays a funny German with a strange backstory. His gun was going to kill Hitler; it has one bullet left in its chamber that was supposed to assassinate the world’s most hated dictator. They needed Nick Wyman to put that story over.

Off topic: David Blaine entertained everyone at the after party at Hurley’s with electrifying card tricks. He told me loves to travel through the country performing at small clubs, but won’t do Las Vegas. Too big and impersonal.