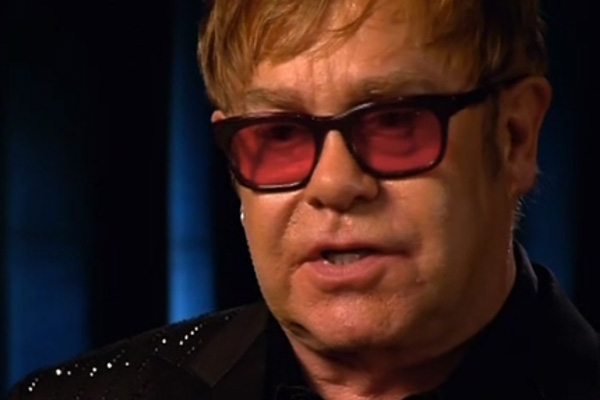 You know things are over the top when I’m defending Madonna. But really, enough. Today some DJ remix guy told a German paper that Madge should retired in 1998. Come on!

Now Sir Elton John is waving the peace flag: I’m told by sources close to the great performer and AIDS activist that this latest brouhaha with Madonna is incorrect and should be set straight. Elton’s remarks about Madonna were not meant for broadcast, and he wasn’t looking to start World War Ten. Madonna and Elton used to be rather friendly, in fact. A source says that Elton actually has favorite Madonna songs. “He thinks ‘Holiday’ is brilliant,” says the source. So whatever he said to that TV interviewer, it wasn’t meant for public consumption. Elton and his people can deal with that on their own. Elton John is a man of peace and love. Just read his new New York Times bestseller, and you’ll see that.

In the middle of all this, a fan pointed me to a side project Elton’s done and you can find on iTunes. He allowed the Australian duo of electronic musicians called Pnau to chop up and remix some of his old records and reassemble them. The result is a very cool set of dance songs called “Elton John vs. Pnau.” The duo mixes in some of my favorite lesser known songs like “Harmony.” “Grey Seal,” “High Flying Bird.” and “Solar Prestige Gammon,” whipped them in a Cuisinart with “Goodbye Yellow Brick Road,” and “Someone Saved My Life Tonight,” made a soothing summer treat. Download these tracks, Elton John fans. (I wish Cirque dul Soleil would do an Elton show like their Beatles show.)

As for Madonna, she probably doesn’t care what anyone thinks. But after her disaster with Raising Malawi, and antics with nipples, swastikas, etc she might consider using a crisis counselor to help her navigate this chapter of her unusual life. And really, no Nazi symbolism at Yankee Stadium. That’s my free, and heartfelt, advice.