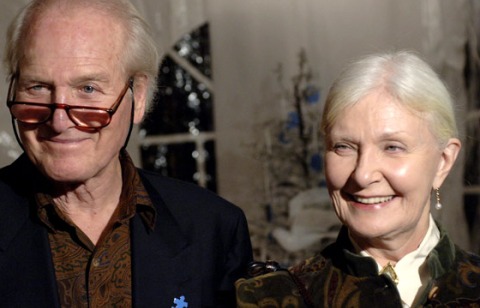 I wonder if Anna Wintour, who helped organize tonight’s Obama fundraiser at Harvey Weinstein and Georgina Chapman’s Westport, Connecticut farm house, has any idea who Jerry Springer is. Or if Joanne Woodward knows who he is, either. But Springer is there, with his $35,580 check. So are Wintour and Woodward, the famed actress and widow of Paul Newman. Weinstein is co-hosting with Anne Hathaway and Aaron Sorkin. So far, the pool reports noted that Obama praised Hathaway and Sorkin in his speech. Weinstein called Obama the “Paul Newman of Presidents.” These fundraisers for small groups-around 50 tonight–are chicken feed compared to the massive boatloads of money being funneled to Mitt Romney via Sheldon Adelson and the Koch brothers. Fair’s fair. I have no info on this, but I could see Harvey Weinstein organizing a Madison Square Garden concert a la 1972 for McGovern with big rock names, comedians, and speakers. Just wait. But Jerry Springer? A check’s a check.

Picture–Joanne Woodward and the late, great Paul Newman. So classy of Harvey to have the First Lady of the Arts from Westport. A nice touch.