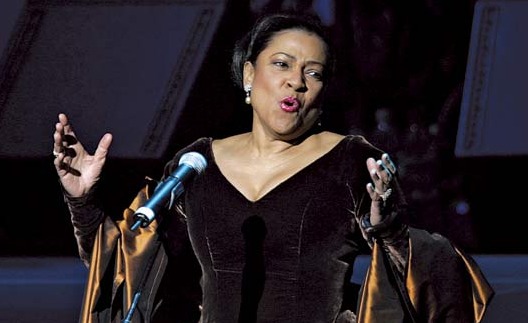 Before we start another week, I want to tell you about one of this summer’s great treats. Back in June, opera great Kathleen Battle played a rare, single show at the Blue Note in the Village. The next day I had kidney stones removed, and never got to write about the show. (I had my own Battle!) Now stone-free, I’ve been thinking about Kathleen and listening to her many recordings. Now in her 60s, she remains a marvel. Her rich soprano is more textured than ever. I wish she were still doing full scale operas. She has at least three Grammy Awards for recordings she’s made including her Mozart album from 1986. I had the great pleasure of hearing her sing a couple of years ago with Bono at a charity dinner; her performance was so gorgeous I thought Clive Davis was going to sign her to do a pop record.

At this second annual Blue Note concert, the place as you can imagine was packed. And there were lines of people waiting outside to get in. I wish they’d recorded the evening. Battle mixed spirituals with Gershwin, Rodgers & Hammerstein, Billy Strayhorn, and Duke Ellington. The crowd loved it and so did she– especially wtih the famed Cyrus Chestnut on piano. The highlight of the evening, called “Something to Sing About II,” were the Ellington numbers, I thought. It was the closest you could make jazz into opera and retain its soulfulness. The Battle was won!

Where else do I run into Kathleen Battle? She’s the backstage guest of every important singer, from Stevie Wonder to Aretha Franklin. They all revere her. I’m hopeful she’ll make some more records now. (Are there any labels still recording magnificent singers who don’t cover pop and rock?) She’s one of the great gems of our generation.