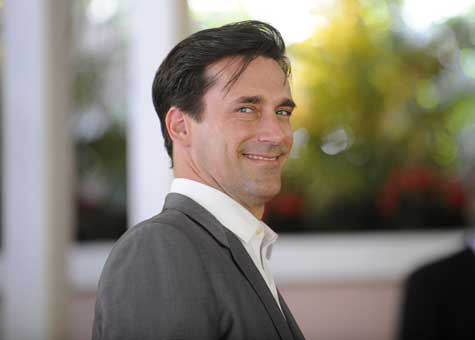 Because everyone has short memories, I thought I’d circle back to this scoop from about a month ago. That’s when I reported Larry David’s improv movie, directed by Greg Mottola, was going forward at Fox Searchlight. I told you that Jon Hamm, our beloved Don Draper from “Mad Men,” was set to play his foil in the film–much the way Ted Danson and other have in “Curb Your Enthusiasm.”

Yesterday HBO announced they were doing the film instead of Fox Searchlight. This makes more sense, as Larry has his fan base on HBO. Before this change, Hamm was still in place–even as of last week. If there’s any change, it could be because of Hamm’s “Mad Men” deal. HBO didn’t announce his name. Hamm could have a no-HBO clause in his contract from “Mad Men.”

That would be a shame. It’s not a series, it’s a movie. But if Hamm got an Emmy or Golden Globe nomination for the David movie, it could be awkward for AMC. Let’s hope it works out. Jon Hamm is very funny, with David he’ll be excellent.