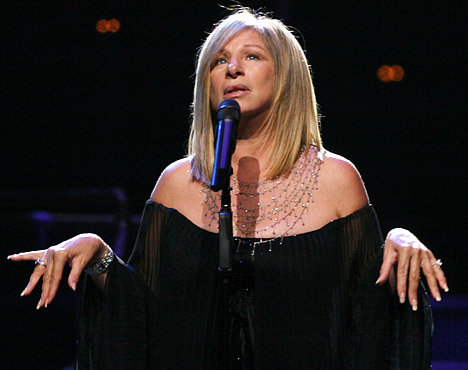 Barbra Streisand is going to have a big fall season. It looks like her much rumored boxed set, called “Release Me,” is on the Sony schedule for September 25th. This is supposed to be a collection of hits and rarities designed to mark Barbra’s 50th anniversary with Columbia Records. She was signed in March 1962, and signed a new contract this past spring. I think she may have broken Johnny Mathis’s record with the record label. Barbra’s also had the same manager, the great Marty Ehrlichman, the whole time!

“Release Me” will precede by a couple of weeks Streisand’s performance at the new Barclay Center in Brooklyn. People are already paying scalpers to get into that room. It should be quite a night. Then, come Christmas Day, Streisand returns to the big screen in a comedy with Seth Rogen called “The Guilt Trip.” And she’s preparing to direct her first new film in 15 years– as I reported exclusively this spring–called “Skinny and Cat,” starring Colin Firth and Cate Blanchett.

As for Sony Music, it’s their season of boxed sets. They just had the excellent Paul Simon anniversary edition of “Graceland.” Also in September comes the 25th anniversary edition of Michael Jackson’s “Bad” complete with a Spike Lee documentary about the making of the album. Sadly, the mastermind behind “Bad,” Frank DiLeo, passed away unexpectedly a year ago on August 24th. I’m told the “Bad” box will have significant mentions of him and his role in putting it all together. In the year before Frank died, this was a project that he was very involved in. And there are still issues lingering between Sony and DiLeo’s estate on financial matters.

Sony’s Legacy division is very good, though, with these anniversary releases. They just put out a big package on Art Garfunkel. And there are still rumors of a Bob Dylan extravaganza in the works.

And by the way: repackaging old material is very ‘in’ right now for the baby boomers. The Beatles ITunes only set, “Tomorrow Never Knows,” sold 14,000 copies last week and hit the SoundScan chart. It’s only available digitally, and it’s really just a bunch of existing songs re-presented in a new grouping.