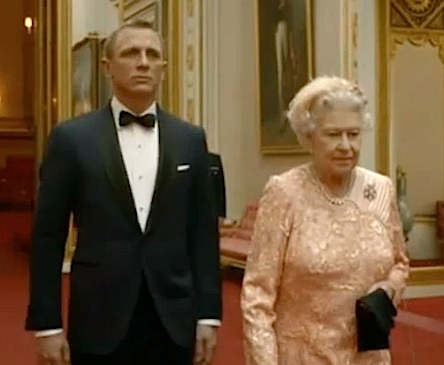 We saw James Bond parachute with the Queen into Olympic Stadium last week, didn’t we? And then there he was, with the Queen, on video. But actor Daniel Craig wasn’t there on opening night–even as a guest. I asked him last night where he was during the grand Olympic opening ceremony? “Somewhere else,” he snapped at the opening last night of “The Bourne Legacy” starring his wife Rachel Weisz, who was married to “Black Swan” director Darren Aronofsky.

The pair fell in love on a movie that turned out to be quite a disaster, called “Dream House.” The film ended a nightmare, costing over $75 million and making just $37 million worldwide. Craig next stars in the James Bond film, “Skyfall,” which comes out this November most likely with a theme song (crossing our fingers) sung by Adele. Weisz, meantime, is a knockout as Jeremy Renner’s accomplice in “Bourne.”

Her next big role as the Wicked Witch of the East in “Oz,” with James Franco, opening next March. Sadly, that’s the Queen who gets the house dropped on her, and loses the ruby slippers to Dorothy. Luckily, Weisz is more like Gilda, the good witch, in what we call real life.

PS Here’s a link to the new “Skyfall” trailer: http://www.youtube.com/watch?v=ozgZvg3cggE