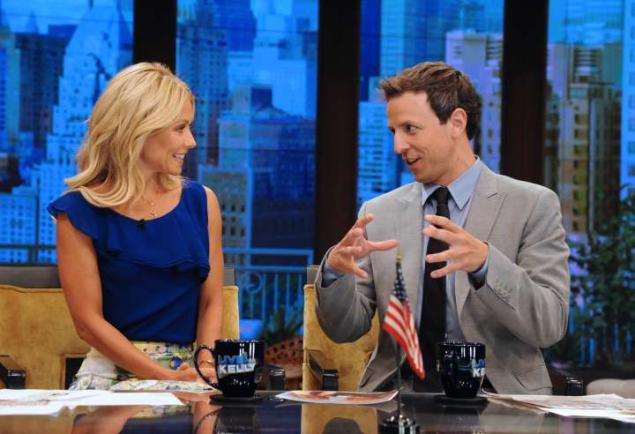 It’s the last week of live shows this season for Live with Kelly, and Seth Meyers is still the leading candidate to join the show next month as permanent co-host. This week, Chris Harrison, from “The Bachelor” and “Bachelorette” has today and tomorrow. Then Nick Lachey, who’s sort of a singer and one of the 21st century’s many people who are well known for being famous for no reason, takes the balance of the week. B

ut then “Live” goes into a month of reruns. Along the way, the show has taped some fresh episodes that they’ll intersperse through the dog days of August. But that’s it. When “Live” returns in September, ABC Disney will be touting changes on the daytime schedule including the move of “General Hospital” to 2pm and Katie Couric’s new show at 3.  The pressure will be on to announce a new co-host for Kelly for a new season.

Meyers makes the most sense. (Thanks to today’s NY Daily News for crediting this column with citing Meyers as the leader back on July 5th.) The “Saturday Night Live” star already lives in New York, and is comfortable with going out at night and telling stories the next day. He has an excellent rapport with Ripa. He’s the right age for the sought after demographic (young moms). He’s edgy enough to make the show interesting, but never offensive. Unlike many of the other guest co-hosts, he’s not bland either. And he’s single, so there’s always the possibility of a “Live” build up to a wedding–a Michael Gelman favorite production.

Is he Regis? No is Regis. Everyone wants Regis to come back. He’s not coming back. Regis is 81 this summer. He’s enjoying his life, doing all kinds of guest gigs. I’m told he has all kinds of offers and proposals for shows. He doesn’t want to work 5 days a week, which is a problem. Regis needs some kind of once a week show. But he’s not coming back to “Live.” Give the guy a break. As he used to say, “I’m only one man!”

In the end, Seth Meyers’ deal will come down to money and schedule. Lorne Michaels will still want him for the news on “SNL,” especially through the election. And remember, “SNL” isn’t on every week. Meyers has lots of downtime from that show. If ABC/Disney is willing to make it work, it will work. And in five years, when Jimmy Fallon moves up to the Tonight show, Meyers can take his spot. Or something else will happen that will give him a talk show at night. By then, Paris Jackson will be ready to take over “Live.”