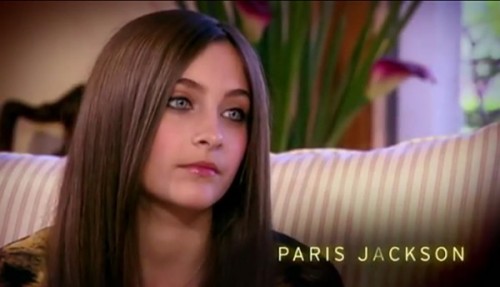 Fresh from her success as war correspondent in her own home, 14 year old Paris Jackson–star of the summer, by far–has taken on a new cause. She’s defending Justin Bieber on Twitter from an attack by much older–yes, 26– actor and singer Drake Bell. Who is Drake Bell? For those of us over 21, he’s the biggest Nickelodeon star ever, from their series “Drake and Josh.” (Josh Peck, 25, was the very good star of a movie no one saw but I liked called “The Wackness.”)

Anyway, Drake Bell posted a questionable picture of Bieber tonight, thus inciting little Justin’s fans. Paris, not watching the Olympics (she Tweeted earlier that she didn’t care for them) came quickly to Bieber’s defense. What you might not know is that Bieber lives in the same gated community in Calabasas. Paris doesn’t want her neighbor attacked. (Yes Justin has left Canada for more privileged environs. Thank YouTube for that.)

So now it’s war. Paris having just won a war, is on a roll.

The Bell-Beiber conflict began about a week ago. The Bieb’s fans have been attacking Bell ever since. Bell wrote: “I haven’t listened to much Justin Bieber but his songs must be 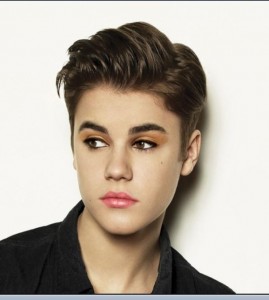 full of hate and rage because that’s what his believers are filled with..”

Today he  Tweeted: I don’t “Hate” @justinbieber!! I just think his fans are repulsive. Not a huge fan of that style of music…big deal…I don’t like popradio”

And he put up this picture. Paris didn’t like that. “If u wanna compare the amount of fans or amount of TALENT even between u & Justin you know u would lose right? know ur place” She later added: “just like he stated his opinion , i stated mine …although posting a hate picture isn’t really an opinion but oh well”

Me, I don’t careabout Justin Bieber, I don’t know who Drake Bell is, and I wish Paris would watch the Olympics. But it’s Sunday night, and more importantly, the Yankees are taking it on the chin tonight from the Red Sox.

I’m sure this tempest in a teapot will go on for a while. But here’s my question. If Justin Bieber has so many fans, how come they haven’t bought his album or singles? 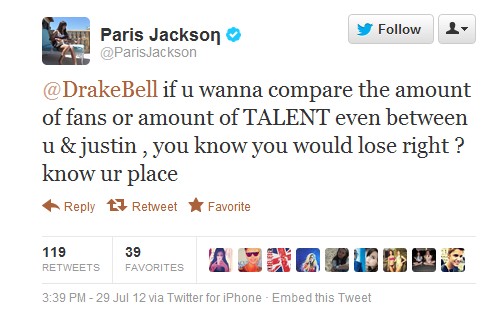